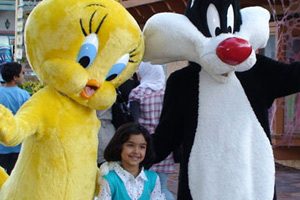 The Six Flags amusement park chain has had its share of bad press lately, what with kids getting decapitated or having their feet chopped off on roller coaster rides, filing for bankruptcy and other Dan Snyder-related disasters. But the latest flap is more political. Tea partiers and other anti-Islam activists are freaking out about a Muslim Family Day planned for several Six Flags parks around the country on Sept. 12, the day after the World Trade Center attacks. The event, sponsored by the Islamic Circle of North America (ICNA), offers Muslim families a chance to hang at the amusement park and be catered to by modestly dressed employees and halal food vendors.

While Six Flags has been holding these events since 2000 for the 42-year-old Muslim nonprofit, apparently this year, it’s getting more attention, both because it falls on the weekend of Sept. 11 and also because of the ongoing controversy about the Muslim center planned a few blocks away from Ground Zero in New York. Naturally Glenn Beck, who mocked the event on his show last week, and Fox News have stoked the paranoia and opposition, giving the day ample coverage. Last week, Fox hosted guests who have suggested that the ICNA is a front for Hamas and other terrorist groups. Now, tea partiers are in a full froth about the event and there are already calls to boycott the bankrupt amusement park chain.

On the Tea Party Patriots website, a member posted an item entitled, “Stop Six Flags Muslim Family Day” which includes a missive from Annie Hamilton, an L.A. woman leading the charge against the park. She writes:

Muslim Day at Six Flags is inappropriate for a multitude of reasons and I’m saddened and shocked by the ignorance of the Corporate folks and by the action that now must be taken by the rest of us.

First, Islam is NOT a religion, it is an ideology – the religious portion only encompasses 11 % (the qur’an) the rest is the Sira and Hadith and the closest parallel to Islam is the Ku Klux Klan – if that is Six Flag’s idea of ‘appropriate’ then by all means, hold your day on September 12th but don’t plan on expanding any time soon because not only will we ensure that you don’t grow, we’ll make sure that your parks become a thing of the past…

None of the tea party commentaries mention that one of the men who first established the Muslim Family Day event in 2000 was himself killed in the attack on the World Trade Center. Nor do they seem to understand that the scheduling issue has far more to do with the Muslim calendar than any intentional desire to link the event to 9/11. The event is designed to celebrate the end of Ramadan, which ends on Sept. 10 this year. ICNA obviously didn’t want to have its festivities on 9/11, so scheduled it for the next day. (Some tea partiers, meanwhile, have actually scheduled a big political rally on the National Mall for the anniversary of 9/11, but they don’t see a big problem with that.)*

Those nuances seem utterly lost on the tea partiers. So far, though, their freakout hasn’t yet persuaded Six Flags to cancel. The company is either nobly standing firm in their commitment to diversity, or is in dire need of the 50,000 customers the day typically brings to their parks. Either way, a Six Flags spokeswoman told Fox News last week that the day would be nothing more than a “fun-filled family outing that typically coincides with Eid, the end of the Ramadan holiday.”

*UPDATE 8/25/10: The original version of this story misstated the name of the ICNA president. He is Zahid Bukhari.