This week alone a pipeline in Michigan dumped up to 1 million gallons of oil into a river and a tugboat hit a wellhead in a Louisiana marsh causing a 100-foot geyser of oil and gas to erupt—and this, of course, on top of BP’s massive spill. Due to the Gulf disaster, oil catastrophes are getting some more ink now, but this obscures the fact that minor (and sometimes major) disasters go unnoticed in the US all the time.

A new report, released today by the National Wildlife Federation (NWF), details a number of these accidents over the past years. While the Deepwater Horizon disaster has surpassed previous spills to become the worst in US history, thousands of smaller spills, explosions at oil drilling or refining facilities, fires, and leaks have claimed dozens of lives and wreaked havoc on the environment in the past decade alone alone. Most of these accidents have never made national headlines, but serve as a reminder that oil and gas is a dirty (and deadly) business.

From 2000 to 2009, onshore pipeline accidents caused 2,554 major incidents, including 161 deaths and 576 injuries. Offshore, 1,443 incidents caused 41 fatalities, 302 injuries, 476 fires, and 356 releases of pollution into the waters. “These things happen nearly every day,” said NWF’s Tim Warman, director of the organization’s global warming solutions program. “Disasters are just a normal part of doing business for these oil companies.” 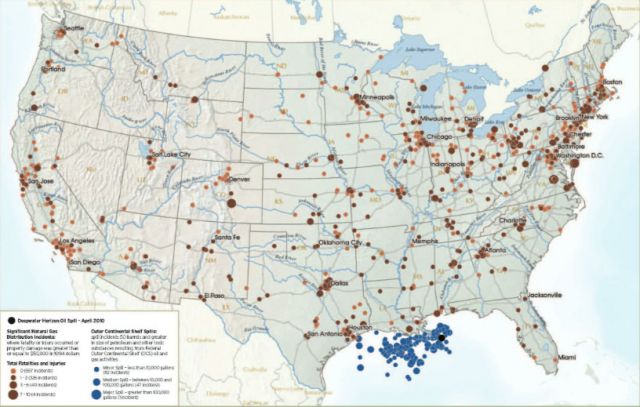 The report includes vivid, tragic details of many of these accidents. Some of the lowlights:

July 2001: One worker was killed and others were injured during an uncontrolled well blowout in the Texas offshore area of the Gulf of Mexico during drilling operations. The fatality, injuries and blowout occurred in association with the jack-up drilling rig Marine IV, then owned by Pride Offshore Drilling.

On Friday morning, February 21, 2003, a tanker barge off-loading gasoline at ExxonMobil’s oil depot at Staten Island, New York exploded with tremendous force, shaking businesses and homes for miles around. Black smoke from the blaze drifted through the boroughs of Brooklyn, Manhattan and Queens and rattled city residents. On Wall Street, stock traders, thinking that the explosion was a terrorist attack, began to feverishly sell off stock. Meanwhile, at the accident scene, it looked like a war zone. “I looked up at the sky, and I saw pieces metal flying all over,” said worker Jaime Villa, who was repairing a pump at the depot when the barge exploded. “I ran as fast as I could go.”

On January 13th, 2004, the driver of the Petro Chemical Transport tanker truck had just filled up for the second time that day at the Citgo fuels terminal in Baltimore, Maryland. He was running a little late and headed for his next delivery stop south in Bethesda, Maryland. As he came into the turn off the elevated ramp, passing over I-95, he lost control of the truck as it rode over and through the concrete guard barrier, going airborne over the side, and crashing onto the northbound I-95 lanes below. An explosion and large fire followed, spreading 8,800 gallons of burning gasoline all over the traffic lanes and beyond. Four vehicles traveling northbound on I-95 drove into the fire, losing visibility and colliding. “There was fire everywhere,” reported one spokesman for the Maryland State Highway Administration. “It was down in the woods, on other vehicles. It was terrible.” Later, after firefighters had extinguished the blaze, they found the wreckage of five vehicles within the burned area. Four people died in the incident with one of the commercial truck drivers escaping from his burning vehicle.

The Gulf has gotten a good deal of attention, but these everyday costs of oil dependence usually go unnoticed.