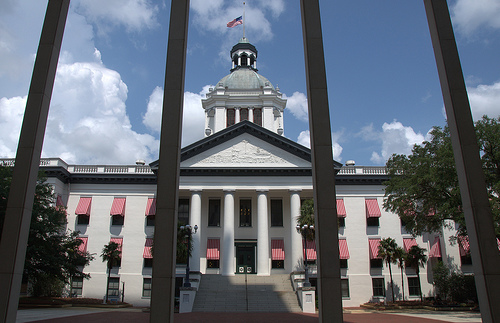 While the mainstream media was somewhere inside the Beltway, wringing its hands over a USDA bureaucrat and some emails by “liberal” journalists, some actual stuff happened in Florida. Gov. Charlie Crist had been calling for months for a special legislative session to address offshore drilling in the state. It finally came on Tuesday, lasting just over three-quarters of an hour. And if the Republican majority in Florida’s House and Senate had their way, it wouldn’t even have lasted that long.

Crist (the former Republican), Florida Democrats, and a crowd of demonstrators outside the Tallahassee statehouse wanted only one thing out of legislators: to let Floridians vote on a constitutional amendment in November that would ban future drilling within 10 miles of the Sunshine State’s shores.

GOP lawmakers didn’t have to be in favor of the amendment. They only had to give state voters an option at the polls. All it took was a simple up-or-down vote on the ballot issue. Republicans used to like those kinds of votes.

Instead, they voted to leave:

What in the world are these Republicans thinking? Let’s see if we can parse it out:

Almost as soon as the House and Senate were gaveled in, the majorities moved to adjourn. The only reason they couldn’t leave sooner was because those motions required a debate, and both sides did a few minutes of grandstanding before leaving, probably for lunchtime Manhattans at Andrew’s, a joint across the street from the Capitol.

Does anyone not have a basic grasp of the fallout from “what’s happening in the Gulf”? We do.

I’ll try not to belabor the point; the amazing folks at the St. Pete Times, Miami Herald, and others are doing a fine job of covering the Florida GOP’s pivot, and you should check them out. But how can this possibly benefit Republicans, strategy-wise?

The short answer is, it doesn’t. There is a minor tactical gain to be made: In an election year where Republican voters are more fired up than their Democratic counterparts, anything that might encourage Democratic turnout in November—like a drilling-ban initiative—is wolfbane to GOPers. And to be sure, blocking legislation has been part of the Republicans’ nationwide strategy; they’d like to pin gridlock and government do-nothingism on their new mortal enemy, Crist, as he vies for Florida’s open Senate seat—it’s the same tactic they’re using to hammer President Obama and the Democratic Congress.

But strategically, this can only hurt the GOP. For one thing, they’re in the majority in both state houses; legislative failures are theirs, not the Democrats’. For another, it smacks of hypocrisy to call for more study, deliberation, and delay, when national GOPers are chiding the Obama administration for not doing more sooner in the Gulf of Mexico.

There’s also the matter of Republicans taking a stand against public opinion: In a new poll published Monday, Floridians opposed drilling within 10 miles of shore by 50 percent to 28 percent.

Most damningly, GOPers are hypocritically violating the tenets of their new base, the tea party movement. Every day, we hear from tea partiers how government is growing, taking away more individual freedoms. And yet the Republican majority in Tallahassee opted to deprive Florida citizens of their right to vote, yea or nay, on an issue of great import to everyone.

Will that hurt the already-limping state GOP? Probably: The Monday poll also found that, whether they were for the amendment or against it, 71 percent of Floridians wanted the chance to vote on it in November. And a plurality, 36 percent, said they’d be likelier to reelect a state legislator who “voted to place a constitutional amendment on the November ballot for voters to decide whether or not to ban oil drilling within 10 miles of Florida’s coast.”

Maybe that’s why Crist called the majority’s evasion Tuesday “a real slap to the people.” The party of “Hell, no” just gave Florida voters an “Oh no they didn’t” moment.