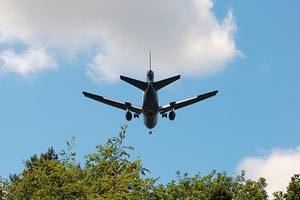 A while back, I griped about the environmental irresponsibility of a recent JetBlue promotion that offered $20 last-minute round trip fares to various US cities. A bunch of commenters pointed out that in a way, specials like this actually save CO2 emissions, since they put butts in would-be empty seats. But I was still skeptical: Even if cheap fares help fill seats, don’t they just create more demand for flights in the long run?

The short answer is that it depends on the nature of your trip. Mikhail Chester, a UC-Berkeley post-doctoral researcher in civil and environmental engineering, points out that sometimes cheap fares can actually help prevent car trips. “If you were planning on driving from San Francisco to LA, but you decide to hop on a cheap flight at the last minute instead, that’s one less car trip,” says Chester. “But if you buy a cheap ticket on a whim, that’s different.” Let’s say I had gone to Austin for the evening, like my roommate wanted to. All of a sudden, we’re talking restaurants, bars, hotel stay, and maybe even a car rental—all of which create emissions I would have avoided by spending a quiet evening at home.

But the long answer is more complicated, and it helps to understand why airlines offer bargain fares in the first place. Chester’s colleague Megan Smirti Ryerson studies airline-ticket pricing models. Ryerson explained to me that although airlines typically don’t make money on these deals, cheap flights do help them stay competitive. At many airports, each airline is alotted a certain number of take-off time slots every hour. “If you don’t use your slot 80 percent of the time, you’re going to lose it to one of your competitors,” says Ryerson. So in the long run, it makes more financial sense for an airline to keep all of its slots than give them up, even if the flights aren’t completely full. “It would be so much more efficient to get everyone on a larger plane and have less frequent flights,” says Ryerson. “But in order to be competitive, airlines have to oversupply frequency to assert their market dominance.”

Cheap fares are also an excellent marketing strategy, says Ryerson. “JetBlue tweets to their millions of followers about the deals, and those tweets get retweeted,” she says. “It gets people to the website. And even if those people don’t use the cheap fares, maybe they are looking for another flight.”

Bottom line: Considering that planes will probably take off regardless of whether they’re full, indulging in a cheap flight once in a while is okay, especially if you’re saving a car trip. But don’t allow those JetBlue specials to let you forget about air travel’s giant carbon footprint. If everyone flew less overall (which would be a whole lot easier if our rail system wasn’t so inconvenient and slow), maybe airlines wouldn’t find it worth their while to send all those half-empty planes up into the air in the first place.