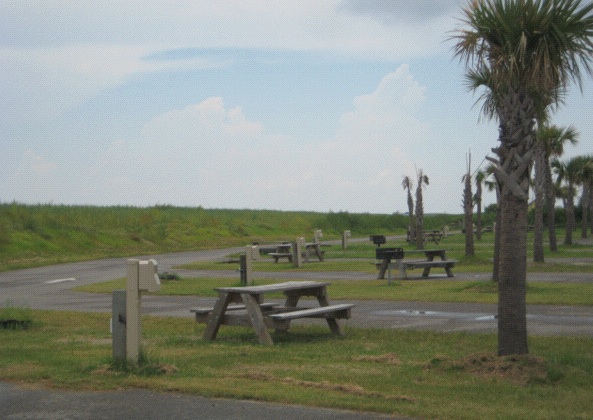 Grand Isle, Louisiana—One of the three occupied campsites at Grand Isle State Park is taken up by an environmental activist in a bio-diesel bus; the other two are active in the oil industry. I get the now-familiar “we’re not allowed to talk to you” from one couple involved in the cleanup. But Timmy Magnon, who’s there with his wife and kids, is more open. He works in the industry (not for BP) and is camping here on a business trip; it’s cheap, conveniently situated (there’s a seaplane base down the street), and available on short notice.

“It was bound to happen sooner or later. All we keep saying is it’s better it happened to an oil giant like BP than a smaller company that didn’t have the funds to contain the spill,” he says. “It’s a cost of business.”

Closer to the beach, a few steps past the red-and-white signs warning pedestrians to stay clear, I meet Wendy Ray and her family, visiting from New Orleans. She’s snapping photos of her kids in front of a backdrop of booms, Coast Guard vessels, mounds of sand, and orange barriers.

“Am I supposed to smile?,” asks her daughter.

Wendy used to visit the park as a young biology student; she hadn’t returned in 35 years, until today. “It was more natural then,” she says. No kidding. The beach today, in addition to the sights mentioned above, also carries with it a thick aroma of petroleum, which Wendy says reminds her of fried fish.

Over the last few weeks, there’s been a bit of a kerfuffle over reports, greatly exaggerated, that the Gulf’s floating oil has disappeared. I won’t really comment on that—read Mac McClelland instead—except to say that after actually seeing the town, the search for oil really misses the point. Driving down Bayou Lafourche, I passed dozens of tied-up fishing trawlers idling away the cleanup, boarded-up seafood shacks, and rows of homemade signs lambasting BP. You need to see oil in Grand Isle as much as you need to see the shark in the first hour-and-a-half of Jaws; the fallout should be enough. Anyways, there’s little I can say about Grand Isle that Mac hasn’t already written. So check her stuff out here, and read the rest of MoJo‘s full team coverage here.

Update: This just went up today, but you should really just stop what you’re doing and read Julia Whitty’s piece on what BP’s scientists aren’t telling us about the spill. It’s probably the definitive (at this point in time) explanation of just what we’re missing when pretend the oil isn’t there. Seriously, check it out.