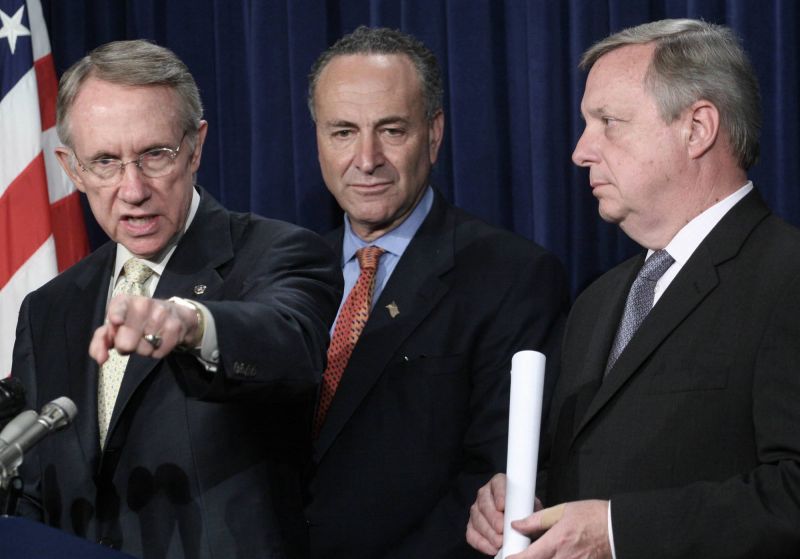 That’s the latest prediction from wunderkind pollster Nate Silver, who just made the move over to his new perch at The New York Times‘ website. A loss of six or seven Senate seats would leave the Democrats with a slim majority of 52 or 53 seats, nowhere near the filibuster-breaking supermajority of 60. And you can all but rule out the passage of any new, comprehensive legislation—i.e., health insurance reform, financial regulatory reform—if Silver’s projection becomes reality this fall. After all, Democrats, with a near-supermajority, could barely scrape together two or three GOP votes on major legislation this spring and summer; there’s no chance they’ll find seven or eight votes if Silver’s right.

It could be even worse for Dems. There’s a 20 percent chance, Silver found, that the Dems will lose 10 or more seats, possibly putting them back in the minority.

When it comes to watching the ongoing Senate elections, Silver writes that it’s not the headline-grabbing campaigns—Harry Reid vs. Sharron Angle in Nevada, Barbara Boxer vs. Carly Fiorina in California—worth watching. Instead, he suggests keeping a close eye on some of the less-covered races:

Of late, the source of the Democrats’ problems has not necessarily been in high-profile Senate races where the Republicans have nominated inexperienced but headline-grabbing candidates, like Sharron Angle in Nevada and Rand Paul in Kentucky (although the model regards both Ms. Angle and Mr. Paul as slight favorites). Instead, it has been in traditional swing states like Missouri, New Hampshire, Ohio and Pennsylvania. The last time the Democratic nominee in Ohio, Lee Fisher, held the lead in any state poll, for example, was in June. Representative Joe Sestak, the Democratic nominee in Pennsylvania, has not led any poll there since May, and Robin Carnahan of Missouri has not held a lead since January. The Democratic nominee in New Hampshire, Representative Paul W. Hodes, has not led in any of 17 public polls in New Hampshire against his likely Republican opponent, Kelly Ayotte.

The Democratic candidate lags by single digits in each of these states, and victories there remain entirely possible (perhaps especially so in New Hampshire, where the Republicans have yet to hold their primary). But, at a time when they need to be drawing closer to their opponents as the clock ticks toward Nov. 2, these Democrats instead find themselves falling somewhat further behind. We are now close enough to Election Day that a deficit of as few as 5 percentage points may be difficult to overcome, especially in races where relatively few undecided voters remain.

The odds of the Democrats adding a Senate seat, even regaining their 60-vote majority, according to Silver? Three percent. As we head toward the Labor Day holiday, after which general-election campaigning hits high gear and voters really start to tune in, the Democrats need a pitch-perfect strategy, some good economic news, and a lot of luck if they’re going to avoid the kind of result Silver’s predicting.