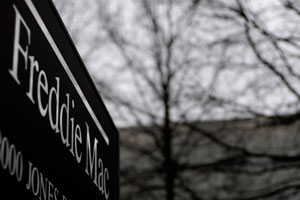 On Tuesday, the Treasury Department played host to a who’s-who of the housing industry: bank executives, bureaucrats, think tankers, academics, and  investors, who gathered in the ornate Cash Room to offer their two cents on how to fix the broken housing finance system, and in particular, Fannie Mae and Freddie Mac. The two housing corporations, which backstop the vast majority of America’s mortgages, have had their balance sheets and reputations badly wounded in the past couple of years. Since the federal government essentially nationalized them in September 2008, taxpayers have propped up Fannie and Freddie to the tune of $148 billion. With $5 trillion in debt on their books, and no plan in place for their future, the troubled twins have become a political lightning rod and punching bags for the GOP.

So what do the brightest minds in housing envision see in store for Fannie and Freddie? Depends on who’s got the mic. The recommendations offered at yesterday’s conference ranged from fully nationalizing housing finance to getting government out of the business of guaranteeing loans. The Obama administration was somewhere in the middle, offering new but vague ideas on tackling its Fannie/Freddie problem.

Treasury Secretary Tim Geithner kicked off the day with a forceful call for responsibly reeling in the extraordinary lifeline handed to Fannie and Freddie. “We will not support returning Fannie and Freddie to the role they played before conservatorship, where they fought to take market share from private competitors while enjoying the privilege of government support,” he said.

HUD Secretary Shaun Donovan affirmed Geithner’s stance. “The government’s footprint in the housing market needs to be smaller than it is today,” he said, noting that it currently guarantees more than 90 percent of all home mortgages. Both Geithner and Donovan’s assurances that Fannie and Freddie will be shrunk, if not euthanized, were a firm response to angry Republicans who have lambasted the administration for not eliminating the corporations sooner. (Indeed, Rep. Spencer Bachus (R-Ala.), the top Republican on the House financial services committee, criticized the Treasury event for not including critics of the administration’s policies and said it appeared to be “laying the groundwork for a predetermined policy outcome that looks uncomfortably similar to the failed status quo.”)

Nonetheless, Geithner assured investors and housing officials that there would always be some form of government support in place. “Without such support,” he said, “the risk is that future recessions could be more severe because the financial system would not have the capital to support mortgage lending on an adequate scale.”

A chorus of housing industry executives joined Geithner in that assessment. Bill Gross, who heads the world’s biggest bond fund, Pacific Investment Management Co. (PIMCO), asserted that the government still has a huge role to play in ensuring the mortgage markets don’t completely freeze up. Gross, who fears the economic recovery has petered out, called for the “full nationalization” of the housing finance business, saying, “We need a government balance sheet. To suggest that the private market come back in is simply impractical. It won’t work.”

Mark Zandi, the well-respected chief economist for Moody’s Analytics and former adviser to Sen. John McCain (R-Ariz.), argued for a more measured approach. While the federal government’s role in housing “needs to be pulled back quite significantly,” Zandi said that now is not the time to do it. “I’m not arguing this year or next,” he said. “The void is still quite large; the private market is dormant, and it can’t step in if the government steps out in the near future. We’re not done; the crisis is still ongoing.”

By the day’s end, the dizzying array of ideas to emerge from the conference left the one with impression that everyone had suggestions—nationalize, privatize, kill Fannie and Freddie, nurse them back to health—but few had concrete solutions. The administration, for instance, says it wants to strike a balance between letting the private market do its job and subtly supporting that market with federal guarantees. But plenty of questions remain: How much support? How soon? What will the revamped Fannie and Freddie look like?

Answers to those questions were in short supply on Tuesday. And we won’t fully know what the administration has in mind for solving the Fannie and Freddie riddle until it publishes its housing-reform framework in January 2011. Until then, there will be lots of bickering in Congress, which is planning hearings on the subject this fall, and plenty more speculation. What’s for certain is that the endgame for Fannie and Freddie can’t come soon enough: If they stay on their current trajectory, according to the Congressional Budget Office (PDF), the twin housing corporations will cost taxpayers a staggering $389 billion over the next decade.