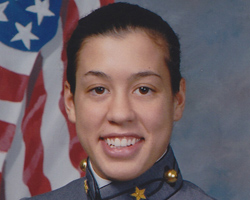 photo courtesy of US Military Academy at West Point

Katherine Miller, a junior at the US Military Academy at West Point, outed herself yesterday while also filing her resignation. In her letter to West Point administration, Miller writes that the current military policy of “Don’t Ask, Don’t Tell” (DADT) had caused her to undermine her own integrity:

Specifically, I have created a heterosexual dating history to recite to fellow cadets when they inquire. I have endured sexual harassment for fear of being accused as a lesbian by rejecting or reporting these events. I have been coerced into ignoring derogatory comments towards homosexuals for fear of being alienated for my viewpoint. In short, I have lied to my classmates and compromised my integrity and my identity by adhering to existing military policy.

West Point’s honor code says: “A cadet will not lie, cheat, steal, or tolerate those who do.” Miller’s need to deceive her classmates in order to avoid expressing her sexual orientation reveals the quagmire many gay cadets and midshipmen hit when attempting to adhere to a strict honor code and suppress their personalities under DADT. It’s pretty clear from her letter that Miller’s classmates were not following the “Don’t Ask” side of the policy, and she in turn had to face an impossible moral dilemma.

Miller ranked ninth in her class of more than 1,100 students and participated in a number of extracurriculars: the rugby and triathlon teams, West Point’s women’s group, and the Gray Zone blog sponsored by the Washington Post. An honor-roll student, she expressed an academic interest in attitudes towards gays in the military, presenting papers on the topic at conferences and publishing an op-ed with the Carnegie Council on Ethics and International Affairs. Miller’s philosophical consideration of the topic shows that she had heavily weighed the policy, done her research, and still ended up deciding it was a moral compromise: “Through my academic endeavors I cannot objectively rationalize the military’s policy concerning homosexuality,” she expresses in her letter.

The DADT policy came under deep criticism this year and may be repealed once a military-wide review is over. Early in July, the Pentagon e-mailed surveys to servicemembers to get a sampling of their views on the policy. But even if a majority are against gays and lesbians openly serving, Miller’s case reveals the extent to which DADT marginalizes LGBTQ service members and fails to meet their emotional and psychological needs. Miller writes: “I am unwilling to suppress an entire portion of my identity any longer because it has taken a significant personal, mental, and social toll on me and detrimentally affected my professional development…I intend for my resignation to offer a concrete example of the consequences of a failed law and social policy.”

While she would like to rejoin the military in the future if DADT is repealed, Miller will attend Yale in the fall on a scholarship from the Point Foundation, which supports students who are marginalized because of sexual orientation or gender identity.