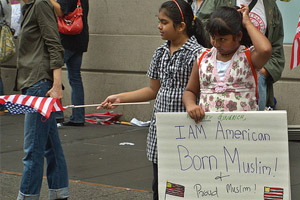 As Fox News, the New York Post, and other right-wing media outlets are stirring up emotions over the so-called “terror mosque” planned near the site of the World Trade Center, I can’t help but think back to the few days I spent in southern Ohio as a volunteer for the Obama campaign in November 2008. It was there, in Fairfield County, that I committed one of the greatest acts of cowardice in my life. I allowed myself to stand by and say nothing while an entire creed was deemed violent, hateful, and un-American.

At the time, the Obama team was already concerned about the false rumor that their candidate, a self-identified Christian, was a closet Muslim. (According to a recent survey, nearly one-fifth of Americans continue to believe this). When approaching potential voters who believed the rumor, volunteers were instructed not to get in an argument over Muslims, their rights, much less what Islam really stands for. Instead, we were given pamphlets about Obama’s faith in Christ and were told to talk about the then-senator’s churchgoing habits.

On one campaign stop I knocked on the door of a middle-aged woman who was shocked to see her son’s name on my list of potential Obama voters. “He had better not vote for Obama,” she declared to me on her doorstep. When I asked her why, she leaned towards me and whispered in my ear, “Well, for one, he’s a Muslim and I have the proof.”

Although I was curious to see her “proof,” I could already imagine what it was: The same old laundry list of hateful ideas that continue to divide American society. That Ohio mother was probably never going to vote for Obama, but what was of greater concern to me was the idea that being a Muslim automatically disqualified an individual from public service in the United States. Looking at me, my appearance and physical features, she might have guessed that I was a misguided but well-meaning New York, Jewish liberal. She had no clue that I was a Muslim.

What I wish Americans like her would understand is that the world’s one billion Muslims are not a monolithic block hell-bent on the destruction of Christendom. Muslims are ethnically and nationally diverse; they are Arabs, Indonesians, Iranians, Canadians, and Americans. They converse in myriad tongues including Urdu, Russian, Turkish, French, and English. Like many Americans, many Muslims mourn the tragedy unfolding in Gaza; and just like many Americans, many Muslims could care less. Some are as religious as any weekly churchgoer; others couldn’t tell you the difference between Mecca and McDonalds.

While proud of their coreligionists’ past and current accomplishments, Muslims often discuss and try to fix their home and ancestral societies’ ills. We curse the filth who throw acid at young girls simply because their parents sent them off to get an education. We organize to protest and prevent the hanging of men accused of being homosexuals. We speak up when historical catastrophes are denied. We deplore violence and terrorism, committed by anyone at home or abroad.

To many Muslims, particularly those living in the United States, the criticism of the so-called “Ground Zero mosque” to be built in lower Manhattan is a strange occurrence. “Haven’t we,” many wonder, “integrated fully into American life?”

I spent one glorious night in August 2001 shaking and grooving at the nightclub located on the top floor of the World Trade Center. At the night’s conclusion I stood with friends in the Trade Center’s plaza, in between those two magnificent towers. I thought about how half of my entire hometown could work in just those two buildings. “I can’t believe,” I told a good friend, “that those bastards tried to take down this whole complex.”

Almost every American-Muslim will consistently condemn what happened on September 11. The real inconsistency lies with the American right. They organize and take names like the tea party and the Minutemen in honor of America’s founders. Yet they ignore the words of President George Washington, who, in a letter to the Jews of Newport, Rhode Island, declared that the United States, “gives to bigotry no sanction, to persecution no assistance, requires only that they who live under its protection should demean themselves as good citizens.” They also ignore George W. Bush’s reminder that Muslims thrive in countries like the United States “not in spite of their faith, but because of it.” American conservatives spoke out in support of the Iranian youth who took to the streets and rooftops of Tehran to protest their government by chanting “Allahu Akbar,” God is great. But popular opinion in America would not permit those same youth to pray in the vicinity of the World Trade Center even though the heinous act committed there had nothing to do with them.

If I could do it all over again and go back to that day in Ohio, I would ignore the pleas of the Obama campaign. I would stand up straight and declare to the misinformed woman that I am a Muslim. Not a “moderate Muslim,” not a Westernized “good Muslim,” but a Muslim like Mahmoud Darwish, like Shirin Ebadi, like Muhammad Ali, like some New York cabbies, and the bankers on Wall Street. But I am also an American, born in California with no other home in the world. I, like my fellow Muslims, love this country and have firm roots here. Spit on me and my faith if it makes you feel better, but our Constitution has given me my seat. I refuse to move to the back of the bus.