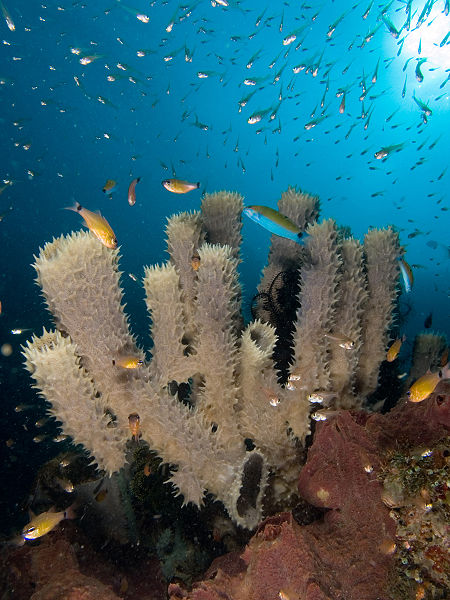 A dramatic rise in sea surface temperatures off Indonesian has resulted in a large-scale coral bleaching event and the death of up to 80 percent of coral cover. Rising water temperatures stress corals. If stressed enough, they expel their plant symbionts: the zooxanthellae that give corals color and perform many of their important metabolic activities. Without their plant partners, corals weaken and will eventually die.

In May, the Wildlife Conservation Society‘s (WCS) “Rapid Response Unit” of marine biologists, dispatched to investigate coral bleaching off the northern tip of the island of Sumatra, found more than 60 percent of corals bleached. Subsequent monitoring revealed one of the most rapid and severe coral mortality events ever recorded, with 80 percent of some species of corals killed since May. More colonies are expected to die in the coming months.

The die-off is due to a frighteningly high rise in sea surface temperatures in the Andaman Sea, north of Sumatra. NOAA‘s Coral Hotspots website records temperatures in the region peaking in late May 2010 at 34 degrees Celsius/93 degrees Fahrenheit. That’s 4 degrees C/7 degrees F higher than long-term averages for the area. If you’ve ever swum or dived in water that warm, you’ll know it feels uncomfortably hot.

Many of these same reefs miraculously escaped damage during the Indian Ocean Tsunami in 2004. Others that had been severely damaged by poor land use and destructive fishing practices before the tsunami actually recovered afterwards dramatically. That’s thanks to improved management, aimed at maintaining fish biomass while allowing fishing on the reefs. But the bleaching and mortality of 2010 have toppled this recovery and will profoundly wallop reef fisheries.

Of real concern: the scale of the sea surface temperature anomaly, which has affected the entire Andaman Sea and beyond. Similar mass bleaching events of 2010 have now been recorded in Sri Lanka, Thailand, Malaysia and many parts of Indonesia. If this scale of mortality is found at other sites, the event will enter the record books as the worst bleaching ever recorded in the region. WCS Marine Program Director Dr. Caleb McClennen tells WCI:

“This is a tragedy not only for some of the world’s most biodiverse coral reefs, but also for people in the region, many of whom are extremely impoverished and depend on these reefs for their food and livelihoods. Immediate and intensive management will be required to try and help these reefs, their fisheries, and the entire ecosystem to recover and adapt. However, coral reefs cannot be protected from the warming ocean temperatures brought on by a changing climate by local actions alone. This is another unfortunate reminder that international efforts to curb the causes and effects of climate change must be made if these sensitive ecosystems and the vulnerable human communities around the world that depend on them are to adapt and endure.”