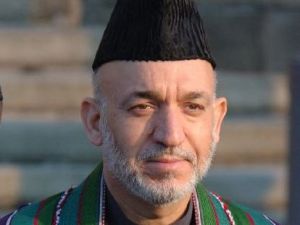 Here we go again. Remember when Hamid Karzai amped up Afghan-US tensions in February when he moved to bring an independent election watchdog under his control? It was this maneuver that led the Obama administration to rescind an initial White House invite. Now, the Wall Street Journal reports, Karzai has staged a similar power play. Following the arrest of one of Karzai’s top security aides on corruption charges, the Afghan president has clamped down on the two NATO-backed anti-corruption units that led the investigation.

According to several Western officials, U.S.-backed investigators taped a conversation in which Mr. Saleh was negotiating a bribe—in the form of a car—in return for squashing an inquiry into the New Ansari Exchange, a large and influential money-transfer outfit. New Ansari has deep connections with prominent members of the Afghan government and the Karzai family, and, according to investigators, it is also suspected of links to Taliban insurgents and narcotics smugglers. The car, valued at about $10,000, was allegedly a small part of a larger proposed payoff, the officials said.

Saleh’s arrest by the anti-corruption units, which are run with the help of American and British adivisors, reportedly enraged Karzai, who viewed it as an assault of Afghan sovereignty. (Karzai apparently wasn’t made aware of the operation, which raises its own set of questions.) As in February, when he felt the international community encroaching on the elections watchdog, Karzai swooped in. In this case, he’s putting in place a commission that will monitor “all of the activities” of both task forces, while also reviewing past and present investigations. “The president has ordered the commission to look into the overall practices of the MCTF because it seems that there are some aspects of where they went beyond the Afghan legislation and the constitution of Afghanistan,” Karzai’s top spokesman, Waheed Omar, said earlier this week.

Since the Obama administration ramped up pressure on Karzai to crack down on corruption, the Afghan leader has taken a schizophrenic approach to the issue, making contradictory statements that cast doubt on his commitment. He calls fighting graft a top priority, but later describes Afghanistan’s corruption problem is vastly overblown. He convenes an anti-corruption conference, then suggests in his speech that a recent anti-corruption coup (the prosecution of the mayor of Kabul) was a miscarriage of justice. He pledges that “individuals who are involved in corruption will have no place in the government,” but chafes when investigators stray too close to his inner circle.

Karzai’s latest move seems destined to neuter these two high-level law enforcement organizations—and it has already succeeded in reviving tensions between the Afghan and US governments. It surely sends another mixed message about Karzai’s anti-corruption commitment. The Major Crimes Task Force, in particular, has often been cited as one of Afghanistan’s anti-corruption success stories by US and Afghan officials alike. Now it’s just further evidence that the Obama administration’s strategy—of which anti-corruption initiatives are a key pillar—is faring poorly indeed.