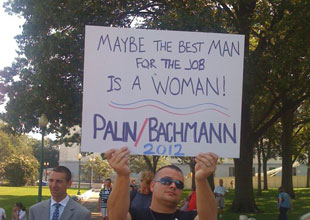 For tea partiers, one of the great disappointments of Glenn Beck’s “Restoring Honor” rally on the National Mall Saturday was the ban on political signs. After all, sign-making seems to be half the fun of going to any good tea party. So the Tea Party Patriots, a national umbrella group for thousands of tea party activists, decided to give folks from out of town a chance to wave their “NOBama signs” in the shadow of the Capitol. On Sunday morning, they convened a tea party, complete with fiery speeches from minor celebs and organizers, plus the requisite open mic session for anyone who wanted a chance to publicly call Obama a liar or read some bad poetry they’d written about liberty.

But signs or no signs, after baking in the sun all day on Saturday (the Mall was so hot that dozens of attendees had to leave the rally in ambulances), not that many Beck fans were looking to do it again on Sunday. Only about 200 die-hards made the trek up the Hill. For their trouble, they were treated with an unusual assortment of speakers. There were the usual suspects—Tea Party Patriot organizers Mark Meckler and Jenny Beth Martin—but there was also a former FBI agent known for telling wild and dubious tales about his time in the Clinton White House, and a former Republican congressman with a long history of trampling the Constitution and trading favors with disgraced lobbyist Jack Abramoff.

The FBI agent was one Gary Aldrich, who, if you recall, in 1995 wrote a bestselling “expose,” Unlimited Access: An FBI Agent Inside the Clinton White House, claiming that, among other things, the Clintons hung sex toys and drug paraphernalia on the White House Christmas tree. (The book, naturally, made him an immediate hero of Republicans and right-wingers everywhere.) He now writes occasionally for WorldNet Daily and runs the Patrick Henry Center for Individual Liberty, a group he founded whose advisory board includes Reagan-era luminaries Ollie North and Ed Meese. The Patrick Henry Center probably earned a few new members at the tea party for giving sweating activists a bunch of bright yellow fans emblazoned with “Stop Socialism.”

Even weirder than having Aldrich on the podium, though, was the presence of former Rep. Ernest Istook (R-Okla.). Of all the former washed up congressmen you could drag out for a tea party, Istook is probably not a first choice. A longtime darling of the Christian Right, the Mormon politician is most famous for his attempts to pass a constitutional amendment that would allow prayer in schools. His record as a social crusader doesn’t exactly align with some of the tea party’s more libertarian or states’ rights positions, or even its reverence for the Constitution.

Outraged to discover an ad on a DC bus urging marijuana legalization during his time on the House Appropriations Committee, Istook once introduced legislation that would punish the DC transit system financially for accepting the ad. His bill also would withhold funding from any transit authority that dared accept bus or subway ads challenging the nation’s drug laws. The law was eventually found unconstitutional by a federal judge who wrote, “the government articulated no legitimate state interest in the suppression of this particular speech other than the fact that it disapproves of the message, an illegitimate and constitutionally impermissible reason.”

Istook’s record also shows scant little respect for local governance. Most Americans don’t realize that DC residents do not have voting representation in Congress. We are the only American citizens who truly understand what it means to be taxed without representation. To their credit, individual tea partiers informed about this abomination are usually deeply outraged. Istook, though, who served on the DC subcommittee of the House appropriations committee (briefly as chairman), has shown little sympathy for DC’s disenfranchised residents. He used his committee post to meddle in the city’s affairs like nobody’s business, taking advantage of the fact that city residents had no way to fight back.

In the late 1990s, for instance, Istook joined with his GOP colleagues to prevent the city from counting the results of a ballot initiative that would have allowed medical marijuana in the District. Eventually a federal judge rebuked Istook and reminded him and his fellow congressmen that they were engaged in a huge violation of city residents’ First Amendment rights. Two years after the election, the ballots were finally counted; the measure passed. But rather than let city residents decide their own fate, Istook helped prevent DC from spending any of its own money to implement the law. Istook also helped push measures that barred the District from using city money to fund needle-exchange programs to fight HIV and AIDS, which are epidemic in the city.

His actions on the DC subcommittee were hardly those of someone with deep, abiding respect for local democracy. On Sunday, I asked him about whether he’s had a change of heart about meddling in the District’s affairs now that he’s come out as a tea partier. But Istook was unrepentant. He even disagreed that city residents were taxed without representation, saying, “You have representation. You just don’t have the same vote.”

Mark Meckler, one of the national coordinators of the Tea Party Patriots, the large national umbrella group that organized the event, said he was unaware of Istook’s history in the District. “DC residents should have a vote,” he said. Even so, Meckler said Istook was a good fit for the tea party because he has a stellar record on the group’s core issues of fiscal conservatism.

But there’s still one more reason why Istook and the tea partiers make rather strange bedfellows: He was implicated in the Jack Abramoff lobbying scandal. Along with taking thousands of dollars in campaign contributions from Abramoff’s firm, Istook used Abramoff’s sky boxes at Fed Ex Field during a Washington Redskins game for a fundraiser. Documents from one of the Abramoff-related prosecutions showed that Istook returned the favor by asking Abramoff what his clients would like to see in an upcoming transportation bill, a move that had Abramoff directing his staff to come up with a “Christmas list” of pork-barrel spending. Istook’s chief of staff ultimately pleaded guilty to conspiracy charges for taking perks from lobbyists in exchange for official favors in a case related to the whole mess. It’s hard to see how this sort of stuff would endear Istook to the tea partiers.

Perhaps they simply invited him to the party because of his singing voice. After reminding the crowd that all of the inalienable rights outlined in the Constitution come directly from God, he declared, “America should bless God,” and then startled everyone by launching into a stirring baritone rendition of “God Bless America.” He wasn’t bad.