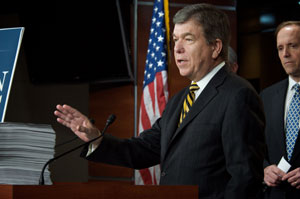 [MoJo has more primary coverage: Andy Kroll has a report on the Michigan governor’s race and a post-mortem on Rep. Carolyn Cheeks Kilpatrick’s political career. I also have the details of Missouri’s competitive House primaries below.]

Rep. Roy Blunt, who held several top positions in the leadership of the congressional GOP during the Bush years, won the Missouri Republican nomination for Senate and will face Missouri Secretary of State Robin Carnahan in the fall. Blunt was leading tea party-backed State Sen. Chuck Purgason, 72 to 13 percent, when the Associated Press called the race.

The Carnahan-Blunt race—which pits members of two Missouri political dynasties (Carnahan’s dad was governor; Blunt’s son served as secretary of state and governor) against each other—is shaping up to be a blockbuster. The winner will replace retiring Sen. Kit Bond, a Republican, in Washington, and Carnahan’s high name recognition and strong polling suggest that this is one of the Democrats’ few legitimate pickup opportunities among 2010 Senate races.

Carnahan, unlike some Dem candidates, doesn’t seem squeamish about being tied to President Obama, who narrowly lost Missouri in the 2008 presidential contest. She better be committed to that position, because if she changes her mind now, it’s going to be really hard to distance herself from the White House—last month, Obama has visited St. Louis and raised $500,000 on her behalf. That’s the kind of thing voters remember. Carnahan probably needed the money—as a longtime member of Congress, Blunt can definitely raise a lot of campaign cash. But hanging out with the President could cost her. One poll puts Obama’s approval rating in Missouri at 34 percent. That stinks.

Fortunately for Carnahan, Blunt has liabilities of his own. Obama may be unpopular in Missouri, but so was George W. Bush. Blunt was a key player in implementing Bush’s agenda, and he knows his work in Congress is a vulnerability. As Andy Kroll pointed out a few weeks ago, Blunt—like Rep. Brad Ellsworth (D-Ind.), who’s also running for Senate—couldn’t even bring himself to acknowledge his current job in his first campaign ad. If Carnahan can tie Blunt to Bush and Congress and make the case that she’s not a “Washington politician,” she’ll have a shot.

The Bush/congressional GOP attack might not even be Carnahan’s most potent ammo. The government watchdog group Citizens for Responsibility and Ethics in Washington (CREW) has repeatedly named Blunt one of its “most corrupt” politicians, and last month it put the congressman on its bipartisan list of 11 “crooked candidates.” Here are some highlights:

As a member of Congress, Rep. Blunt came under fire for a variety of issues including employing the same corrupt tactics that forced his mentor, former Texas Rep. Tom DeLay, to resign. Rep. Blunt’s ethical issues were documented in CREW’s 2006 report on the most corrupt members of Congress.

In 2003, Rep. Blunt divorced his wife of 31 years to marry Philip Morris (now Altria) lobbyist Abigail Perlman. Before it was known publicly that Rep. Blunt and Ms. Perlman were dating – and only hours after Rep. Blunt assumed the role of Majority Whip – he tried to secretly insert a provision into Homeland Security legislation that would have benefitted Philip Morris, at the expense of competitors. Notably, Philip Morris/Altria and its subsidiaries contributed at least $217,000 to campaign committees connected to Rep. Blunt from 1996 to 2006.

Also in 2003, Rep. Blunt helped his son, Andrew Blunt, by inserting a provision into the $79 billion emergency appropriation for the war in Iraq to benefit U.S. shippers like United Parcel Service, Inc. and FedEx Corp. Andrew Blunt lobbied on behalf of UPS in Missouri, and UPS and FedEx contributed at least $58,000 to Rep. Blunt from 2001 to 2006.

Family connections have also helped another of Rep. Blunt’s sons, former Missouri Governor Matt Blunt. Gov. Blunt received campaign contributions from nearly three dozen influential Missouri lobbyists and lawyers when he ran for governor of Missouri in 2004, half of whom had provided financial support to his father. Earlier in 2000, when Matt Blunt was running for Secretary of State, Rep. Blunt was involved in an apparent scheme, along with Rep. DeLay, to funnel money through a local party committee into Matt Blunt’s campaign committee.

In the end, I suspect that Missourians disappointment (fair or unfair) with Democrats’ management of the economy will trump any concerns about Rep. Blunt’s ethics. Carnahan will find that ethical complaints are complicated and hard to explain. Blunt probably knows that 9.2 percent unemployment doesn’t even have to be explained.

UPDATE, 11:45 p.m. EST: In the state’s other competitive primary, it looks like former state Rep. Vicky Hartzler has beaten State Sen. Bill Stouffer for the right to take on 17-term Dem vet Rep. Ike Skelton, the chair of the House Armed Services Committee. Hartzler is a serious candidate, but if she beats Skelton in November, it’s going to be a very bad night for the Dems.