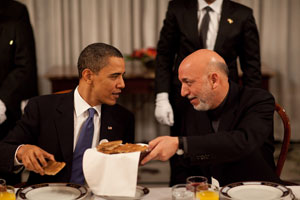 Here’s the good news: The US has a comprehensive strategy for tackling rampant corruption in Afghanistan. Now for the bad: For months, that strategy has been in bureaucratic purgatory in the State Department.

This revelation arrives in the Special Inspector General for Afghanistan Reconstruction’s latest audit [PDF], which assessed the Obama administration’s assorted anti-corruption initiatives and found the overall effort seriously wanting. At least six government agencies are involved in anti-corruption programs, but SIGAR reports that the overarching plan that could be guiding their graft-fighting mission remains in limbo.

A draft of the anti-corruption strategy was completed in October 2009 by an interagency group working out of the US Embassy in Kabul. In the months that followed, it underwent a variety of changes and revisions, and in April, Ambassador Karl Eikenberry signed off on the document. “Nevertheless, the draft U.S. anti-corruption strategy remains unapproved in Washington, D.C.,” SIGAR reports, noting that it still requires final State Department approval. (The State Department did not immediately respond to a request for comment.)

According to the reconstruction watchdog, the strategy lays out an anti-corruption roadmap that includes “leveraging diplomatic and assistance tools to develop the political will to take fighting corruption seriously”; “revoking U.S. visas of corrupt Afghan officials, their families, and their colleagues”; “making greater use of electronic fund transfers in place of cash payments in U.S. government development activities”; and “achieving significant reform and independence of the High Office of Oversight,” Afghanistan’s marquee anti-corruption body.

The plan also outlines steps to reform the US procurement process, which, due to lax oversight and a massive influx of contracting cash, has fueled Afghanistan’s corruption epidemic. Among other things, it calls for “implementing measures to improve perceptions of U.S. government contracting, such as minimizing layers of subcontracting” and “vigorously prosecuting any U.S. or contractor personnel involvement in corrupt practices, such as taking or giving of kick-backs in the contracting process.” (The latter may seem like kind of a no-brainer—but administration officials have suggested in the past that there’s a pretty high bar for prosecuting contracting cases.)

According to SIGAR, the problem isn’t just the lack of a comprehensive strategy. The watchdog also slams the Obama administration for effectively failing to put its money where its mouth is: “U.S. anti-corruption efforts in Afghanistan have provided relatively little assistance to some key Afghan oversight institutions.” SIGAR points, in particular, to the High Office of Oversight (HOO) and Kabul’s top beancounting division, the Control and Audit Office (CAO).

SIGAR audits of U.S. efforts to help strengthen the HOO and the CAO found that less than $1.2 million in U.S. assistance had been provided to those two key Afghan oversight institutions prior to 2010. In comparison, donors from the international community had committed to provide more than $20 million in assistance to those same institutions.

SIGAR’s findings raise significant questions about the Obama administration’s strategy, which, along with an infusion of military and civilian personnel, hinges on creating a credible central government in Kabul. This in turn rests on convincing Afghans that President Hamid Karzai’s government isn’t corrupt to the core. US officials—and the president himself—have repeatedly harped on the corruption issue as crucial to turning around the increasingly bleak situation in Afghanistan; the administration leaned so heavily on Karzai to purge his government of dirty officials that it may have contributed to the strange diplomatic standoff between the US and Afghan governments last winter. Given the emphasis on anti-corruption measures, it’s hard to fathom why the administration’s plan for accomplishing these goals has languished for months without approval.

Meanwhile, the anti-corruption picture that’s emerging from Kabul isn’t reassuring. President Karzai’s latest mixed-message on corruption—which is either one of his top priorities, or an issue that’s overblown depending on which day you ask him—arrived this week when he clamped down on two high-level corruption-fighting units, the Major Crimes Task Force and the lesser-known Sensitive Investigative Unit. Apparently their handling of a recent case, involving the arrest of a top Karzai aide, Mohammed Zia Saleh, wasn’t nearly “sensitive” enough. Angered by the arrest—and probably by the fact that he was kept out of the loop on the operation—Karzai has put in place a handpicked commission to monitor “all of the activities” of both divisions, effectivly neutering them of their independence.

Saleh’s arrest (for allegedly negotiating a bribe in exchange for killing an investigation) could have been billed as a major anti-corruption coup—a sign that Afghan law enforcement bodies are pursuing graft wherever it takes them. Instead, it’s a reminder of the disconnect between the Obama and Karzai administrations, and an episode that’s sure to heighten tensions on both sides. Up until recently, US and Afghan officials had pointed to the Major Crimes Task Force, in particular, as an anti-corruption success story. Thanks to Karzai, that narrative just took a major hit.

Recent polls show support for the Afghan war dwindling among Americans. The SIGAR report—arriving shortly after the damaging release of classified military documents by WikiLeaks—may now make it even harder for the Obama administration to persuade the public that it’s pursuing the correct strategy, especially because a crucial part of that strategy is apparently collecting dust somewhere in DC.