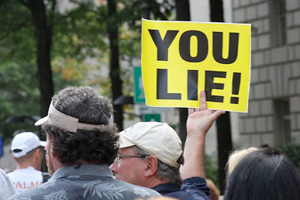 Tea party marches on Washington have gotten so big and unwieldy that the grassroots conservative movement has spawned its own travel agents. And the business is cutthroat—sparking a clash between tea party entrepreneurs replete with allegations of slander, backstabbing, and threats of legal action.

This saga got its start back in the fall of 2008, when Rhode Island travel agent Joanne Griffing lost her job in the recession. At risk of losing her house, she grew desperate. She signed up to take in foster children. She prayed a lot. Her prayers were answered in April 2009, when she got a call from Brendan Steinhauser, a staffer from the conservative advocacy group FreedomWorks, which was organizing a taxpayers’ march in Washington on September 12. They were expecting about 1,000 people. Could Griffing help coordinate their travel arrangements?

Griffing agreed, not realizing that the little march was about to turn into a major political spectacle, with tens of thousands of people flocking to DC from all over the country. She booked hotel rooms for the activists, arranged rides from the airport, and created teapartyplanning.com to market her services. She says she worked like a dog and ended up netting $29,000, enough to pay her mortgage for the year. Since then, she has decided that arranging tea party travel is her calling in life. Currently, she’s busily working to book rooms in DC for this year’s 9/12 march as FreedomWorks’ official unofficial travel planner. But Griffing isn’t alone in the field, and neither, this year, is FreedomWorks, which has some competition of its own from another organization that’s also planning to host a rally that weekend in DC.

Last year, as it became clear that the 9/12 march was going to be bigger than anyone imagined, Florida event promoter Christine Drawdy also joined in, selling hotel rooms, arranging bus trips, and so on. Initially, she started out just helping her local Florida 9/12 group, which had formed in response to Glenn Beck’s call to put conservative principles into action. But eventually she began advertising blocks of hotel rooms on tea party forums and ResistNet, a social networking site for “patriots” and tea party activists. “She came in saying, ‘I’m taking over,'” says Griffing, who was not happy to have the competition.

Both women ended up complaining bitterly about each other to various organizers, each accusing the other of spreading rumors and maligning the other’s credentials. In July 2009, Griffing sent an email to Steinhauser and ResistNet’s Darla Dawald complaining about Drawdy, saying, “I have word from sources in D.C. that she is spreading horrible rumors about me. She’s been contacting every person in D.C. The convention bureau, every hotel driving basically everyone nuts…I have not said one bad word about this girl even while I sit here and am being told she’s trying to slander me.”

The acrimony—and all the emails—forced Steinhauser to intervene in an email saying that, while Griffing would be promoted on FreedomWorks’ march website, Drawdy’s company was free to bring people to DC and to promote her services through ResistNet, which by then was co-sponsoring the march. “This is really the last time I want to discuss this issue between Christine and you, as I need to focus on logistics and working with Capitol Police,” he wrote.

Last year, there was plenty of business to go around, so the rivalry didn’t amount to much more than online sniping. This year, however, is a different story by an order of magnitude.

In a move of inspired entrepreneurialism, the Monday after the 2009 march, Drawdy went to the US Park Service and applied for a permit to hold rallies and marches on large swaths of the National Mall for the entire weekend of September 12, 2010—a day or two before FreedomWorks got there to cement its spot for its repeat march performance. According to Griffing, Drawdy started booking hotel rooms almost immediately. “I wasn’t even home from last year’s event, when I got a call [from a hotel] saying Christine’s on the other line booking rooms for next year,” she says.

With rooms booked and mall permits applied for, Drawdy and some others affiliated with Beck’s 9/12 Project started planning for a big march on September 11, the day before the FreedomWorks event. Initially, the permit Drawdy applied for was in the name of Yvonne Donnelly and the National 9/12 Project. Donnelly is Glenn Beck’s ex-sister-in-law and administrator of his 9/12 Project website. But a few months later, Beck decided to hold his own rally on the Mall on August 28, so Donnelly asked Drawdy to take her name off the permit application. Rather than simply cancel the march and throw in with the Beck or FreedomWorks events, Drawdy told activists that Beck’s emissaries simply wanted to hand it over to “the people.” In early December, Drawdy assured activists that the march would proceed—and that there would be plenty of hotel rooms. In a post on ResistNet, she wrote:

We are going to form a board at the national level for just this march and create a special site for you all to register. We already have the 32 hotels contracted and another 28 hotels pending for this march…

?So can we pull this off? I say yes…we can. I may be the person that was the National Travel Coordinator for last year’s march, but first I was, and am, a 912er. This will happen and we can decide what we want to do each day but it will be a decision determined after considering the desires of the group as a whole. We have plenty of space (and yes…I even reserved the Parking spaces around our venues to give us even more room). So mark your calendars and do not get frustrated.

In November, people associated with the National 9/12 Project incorporated Unite in Action to oversee the march and raise money for the weekend events. Drawdy’s involvement seems to be one reason why the September 11 march and weekend events have taken on the air of a corporate convention rather than a grassroots political rally.

UIA booked the swanky Omni Shoreham hotel for a two-day “Liberty Xpo” that includes activist training sessions, receptions, and a trade show filled with booths from such groups as the NRA, Americans for Prosperity, and the Independence Caucus. Tickets range from about $5 just to enter the exhibit hall to $250 for a “Constitution Pass” that includes admission to all of the events. Hosting a reception will cost supporters at least $30,000.

Meanwhile, Drawdy and her husband David have been advertising their reserved hotel rooms heavily on tea party and 9/12 listservs and forums, as well as on ResistNet. Unlike in 2009, the rooms aren’t filling up quite so fast, possibly due to march fatigue among the tea partiers. Griffing says that by this time last year, all of the rooms she had blocked in DC were sold out. She has protested to FreedomWorks about what she sees as the event promoter’s attempt to cut in on her business, and Drawdy’s posts no longer appear on the advocacy group’s web forum.

For Griffing, the stakes are high. Agents who reserve blocks of rooms at big hotels usually have to sign contracts promising to fill them or pay for the entire package, not just the unsold rooms. So while the commissions are fairly small—$10 a room or 10 percent of the cost—the liability can be huge. Griffing says she is on the hook for about $2 million. If she fills them all, she stands to earn about $62,000. If she doesn’t, she could end up in bankruptcy. Drawdy is apparently in similar straits.

The competition for the hotel business became fierce enough this spring to prompt threats of lawsuits between UIA and Griffing. The feud heated up in March, when Griffing posted the Unite in Action press release about the “March on DC” on her website and suggested booking hotel and air tickets through her. UIA apparently thought she was trying to pinch Drawdy’s business and sent Griffing a cease and desist letter threatening to sue her. UIA wrote that it saw her posting of the press release as “an attempt to posture yourself or your associates as the sponsor of the event for which UIA holds all permits, as well as a copyright infringement.” It also noted that UIA had “engaged the services” of Drawdy’s company, “One-Step Promotions & Incentives Inc. as its exclusive ‘official’ meeting planner for this event, which services include all travel and event housing arrangements for this event.”

The letter demanded that Griffing take down the UIA press release and cease offering to book accommodations in connection with the events planned for September 9 through 12, even though one of those events is the big march organized by FreedomWorks, which put the weekend on the map in the first place and through whom Griffing has been working. After Griffing took down the release, UIA dropped the matter.

Drawdy claims she has nothing to do with UIA or the cease and desist order, despite its direct mention of her company. She says she was unaware of the letter until contacted by Mother Jones a few weeks ago. Any travel booking she’s done for conservative activists, she says, is because of her committment to the cause, not to make money. “I don’t operate on that kind of profit margins,” she scoffs, noting that her business caters to big companies like Samsung and tech company trade shows, not struggling nonprofits. She says she actually lost money working on last year’s march.

Far from maligning Griffing, Drawdy says it was Griffing who accused her of being a “con artist” and telling hotel sales staff and tea party activists that she was not a legitimate travel agent, accusations that prompted the administrator of ResistNet last year to post Drawdy’s credentials on the site. (Incidentally, those included certificates from the National Republican Congressional Committee, signed by disgraced former House Speaker Tom DeLay, honoring Drawdy as chairman of the NRCC’s Business Advisory Council. Political junkies might recall that the Business Advisory Council was a fictional group created for GOP telemarketing appeals that granted chairman status to thousands of donors.) “There is no issue between me and Joanne and there never was,” she insists.

For her part, Griffing says she just wants to do her job and play nice with people. She’s a true believer in the tea party movement, even if she also wants to be its exclusive travel agent. “I don’t need to be rich,” she says. “I just want my country back, that’s all.”