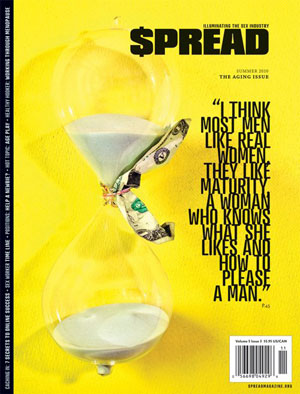 This week the country’s only sex worker-operated trade magazine, $pread, announced that it needs $30,000 or the magazine gets it:

After all these years, five all-volunteer years to be exact, we have come to the conclusion that an all-volunteer magazine is simply unsustainable in the current publishing climate. Short of a donation of $30,000, we will be unable to sustain the magazine past January.

Last week, I interviewed Will Rockwell, the editor-in-chief of the New York-based publication, to get his take on industry myths, decriminalizing prostitution, and more. Some highlights:

MJ: How does $pread tackle myths [about sex workers]?

WR: $pread publishes a range of experiences in the sex industry. For some people it’s all a field of roses; for some of us, it was our best option among limited options, and others experienced violence at the hands of the police and a stigmatizing culture. In all cases, $pread provides a forum for sex workers to speak for themselves.

MJ: Have you ever been in a scary or dangerous situation while working that you think could have been prevented or helped if prostitution was decriminalized?

WR: I was once shorted out of an entire night’s pay by a client who told me he was going to call security on me if I didn’t leave. I decided against calling the police, because every case I heard of involved the police arresting the sex worker. Instead, I had to let a rape go unpunished.

MJ: Why do you think prostitution has yet to be decriminalized in this country?

WR: Sex work has yet to decriminalized in the US because people fear what is most familiar: We know our fathers and husbands are clients of sex workers, and our sisters, cousins, and friends find a way to pay the rent when two or three jobs aren’t enough to make ends meet.

$pread’s Crime and Punishment Issue as well as its Race Issue are slated for publication by January, before the mag closes its doors indefinitely.