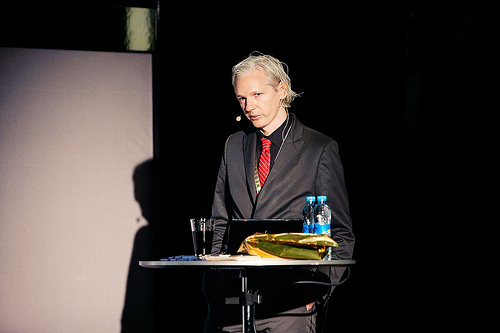 As promised, WikiLeaks today released a secret CIA memorandum on counterterrorism strategy. And while Julian Assange’s website has taken a generally dim view of the US government, the memo it chose to leak portrays an intelligence agency that’s surprisingly thoughtful and, well, liberal-sounding.

The document was produced by CIA’s “Red Cell” team, which was formed after the 9/11 attacks to think creatively about US security strategy. (The Red Cell “takes a pronounced ‘out-of-the-box’ approach and produces memos intended to provoke thought rather than to provide authoritative assessment,” the agency boasts on its own website.) WikiLeaks has drawn water from that well in the past (PDF), but the new memo—dated February 5—asks agency spooks (PDF) a surprisingly self-critical question: “What If Foreigners See the United States as an ‘Exporter of Terrorism’?”

The paper’s authors list a host of recent terrorist activities perpetrated by US citizens abroad: Five Virginians traveling to Pakistan for jihad training; a spotter gathering surveillance for the 2008 Mumbai massacre; Jews like Baruch Goldstein plotting against “perceived enemies of Israel”; and well-known “financial and material support” provided by Irish-Americans to fight British influence over the Emerald Isle. Note wholly domestic attacks, like Hasan and Feisal Shahzad, aren’t mentioned: CIA in this case is wholly concerned with how American citizens can be used to screw with other nations:

Undoubtedly Al-Qa’ida and other terrorist groups recognize that Americans can be great assets in terrorist operations overseas because they carry US passports, don’t fit the typical Arab-Muslim profile, and can easily communicate with radical leaders through their unfettered access to the internet and other modes of communication.

How can they possibly get away with this under American noses? Because:

Al-Qa’ida and other extremist groups have also probably noticed that the US Government has been more concerned with preventing attacks on the US by homegrown terrorists or foreigners than with Americans going overseas to carry out attacks in other countries. Most foreign governments do not suspect that American citizens would plot or perpetrate attacks against their citizens within their borders.

Some Americans do notice—or obsess over—”homegrown” terrorists, of course: We call them conspiracy theorists, mostly of the right-wing variety. (See: Geller, Pam, and Gohmert, Louie.) They usually only obsess over US-born terror in the context of a supposed fifth column against America or Israel; they don’t seem terribly concerned with Americans killing Indians or Europeans. Even if they did care, the worst thing we could do as a society is let them dominate the debate over domestic-based terrorists, because a closing of American society—more profiling, wiretaps, arrests, secret evidence—will probably produce more militants than it catches.

Anyway, what’s the CIA care about all of this? Because if the US doesn’t keep better tabs on its domestic terrorists going abroad, that could have disastrous effects for the US’s goals on combating terror coming in from overseas:

As a recent victim of high-profile terrorism originating from abroad, the US Government has had significant leverage to press foreign regimes to acquiesce to requests for extraditing terrorist suspects from their soil. However, if the US were seen as an “exporter of terrorism,” foreign governments could request a reciprocal arrangement that would impact US sovereignty… In extreme cases, US refusal to cooperate with foreign government requests for extradition might lead some governments to consider secretly extracting US citizens suspected of foreign terrorism from US soil.

Of course, we’ve set the precedent for unilateral renditions of suspects on other nations’ sovereign territory, just as we’ve set the standard for pre-emptive war. The Bush administration argued that terrorism was a national security issue that transcended state sovereignty. No matter what credence that argument might have had, its logical consequence was that other nations similarly concerned about their security could resort to the same tactics and justifications, too.

If foreign regimes believe the US position on rendition is too one-sided, favoring the US, but not them, they could obstruct US efforts to detain terrorism suspects. For example, in 2005 Italy issued criminal arrest warrants for US agents involved in the abduction of an Egyptian cleric and his rendition to Egypt. The proliferation of such cases would not only challenge US bilateral relations with other countries but also damage global counterterrorism efforts.

You can read all of this as a push within CIA to have more power for domestic surveillance of terror suspects—something that, before 9/11 at least, was supposed to be an FBI gig. But more likely, America’s spooks are themselves spooked by the blowback that could result if America doesn’t do a better job of practicing what it preaches on counterterrorism. If so, it seems the Red Cell authors are intent on putting the “intelligence” back in “Central Intelligence Agency.”