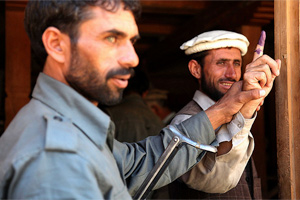 There’s little reason to be optimistic about Afghanistan’s parliamentary elections on Saturday. Experts project a turnout of under five million voters, or about 30% of the registered electorate. Almost all of the 249 incumbents are running for reelection, and most are expected to win. Unsurprisingly, the Taliban have called for a boycott, and thousands of Afghan and US-led NATO troops have been forced to beef up security at polling stations around the country. Afghan authorities have made it easier on the troops—and harder on voters—by closing over 1,000 polling stations, mostly in the south and east of the country. The hope is that fewer polling stations will reduce the odds of fraud in the country’s more unstable regions. It may have the opposite effect on 1.5 million Afghans living in these areas:

Residents and candidates in these places, mostly remote villages in dangerous southern and eastern provinces, said they worry that the move will deepen ethnic rivalries by creating electoral imbalances and accelerate a growing disengagement from the Afghan central government that has fed the Taliban’s resurgence.

Disenfranchisement could be a bad thing in the long run. But for now, NATO and UN authorities are doing whatever they think will result in a smoother election. At his monthly briefing, NATO Secretary General Anders Fogh Rasmussen said he expects the elections to be “more transparent and more reliable.” UN special envoy Staffan de Mistura agreed, saying that they would be “far from” perfect” but “much better than the previous ones.”

This all comes just as the UN decided to force a third of its Afghanistan staffers (the “non-essential” ones) to take an early vacation. “It would be naive not to take these precautions as we are a target,” said de Mistura. Many staffers, he says, were due for a vacation. Others “were told to take their holidays now.” Peeling back just as the situation worsens seems to be a popular trend this election season, as a number of election watchdog groups are opting for “assessments” over full-on “observation” missions:

Nearly all groups are cutting the number of foreign electoral experts and housing those that do come in Kabul or other relatively safe areas of the country.  The International Republican Institute, a US democracy group with a long-term presence in the country, has cut its foreign observers by around half to just five while increasing the number of Afghan observers from 40 to 160. In the last week Singapore-based Asian Network for Free Elections (ANFREL) has already repatriated more than half of its observers because of difficulties finding a security company prepared to provide armed guard to election monitors who need to be able to roam around polling stations.

Even the EU—who sent 120 observors last year—is only sending only seven this time around. So in the face of guaranteed bloodshed and likely fraud, is everyone throwing in the towel?

The words of opposition leader Abdullah Abdullah offer little comfort. A recent Al Jazeera report shows that fraud networks around the country have been circulating fake voter ID cards, with sales agents estimating that they’ve sold over a million during the past three months. So far, no real effort has been made to identify and destroy fraudulent voter ID cards. Abdullah, who finished second to Karzai in last year’s presidential race, says the elections should go forward as planned. “I think at this stage, the only thing that we can do is call on our people to participate in the elections and be observers and monitors [themselves by not buying] fake cards from sources.”

Abdullah’s hopes for the electorate’s integrity may sound naive. But what else can he possibly hope for? For Afghans holding out the hope for change from the bottom up, there’s no viable alternative. The system they’ve got (with Karzai at the top) is the system they have. The UN and other international organizations’ decisions to remove personnel from dangerous areas makes sense. But it also smacks of resignation. After the countless shenanigans of the Karzais, the Salehi arrest-and-not-arrest, and still-unfolding Kabul Bank crisis, merely managing a broken electoral system and praying for a low body count may be the best anyone can hope for.