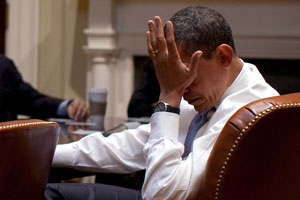 At this point, it seems very likely that the Republicans will gain control of the House of Representatives in the November elections. (They stand a decent chance of winning control of the Senate, too.) That will make Rep. Darrell Issa (R-Calif.) the head of the oversight and government reform committee, giving him subpoena power that comes with the chairman’s gavel. It will also make Rep. John Boehner (R-Ohio) the Speaker of the House. And according to Politico (and common sense), the GOP is already making plans for what they’re going to do if that happens:

The plans presently under discussion include defunding some parts of the new health care law and delaying implementation of others, withholding some of the unspent stimulus funds, and using the oversight power of Republican-led committees to investigate the Obama administration.

“The goal, obviously, would be to make it a one-term presidency,” said a GOP lobbyist briefed on the talks. [emphasis mine]

No one could have predicted! But seriously: this is natural. This is how politics is supposed to work. The Republicans are the Democrats’ political opponents, and they would like to get their own guy into the White House in 2012. This would be true if the parties’ roles were reversed. Sure, the GOP’s commitment to political victory above all else is intensified by the conservative movement’s skepticism about the power of government to do good things. (If compromise will only result in government doing things, and you don’t think government can do good things, then you’re not going to be very inclined to compromise.) But it shouldn’t be surprising that they want Obama to lose (and, by extension, fail).

Despite all this, some people still seem to think that President Obama is going to be able to magically convince the Republicans to work with him. Much of this is the administration’s fault. As Paul Krugman notes, the Obama administration came into office truly believing American Prospect editor Mark Schmitt’s theory that “the massive resistance Republicans posed to Clinton in 1993 is impossible to imagine today.”

Notwithstanding all the evidence of the past two years (and the Bush years, and the Clinton years), many in the administration still seem to believe Schmitt’s theory. One senior administration official I spoke to last month thought that there just wasn’t enough evidence to tell what the GOP will do if it’s running Congress again. (That person also needed to be pressed to acknowledge there was a difference between Speaker Boehner and Speaker Pelosi.)

Anyway, spoiler alert: If the GOP takes back the House and/or the Senate, they’re going to devote the next two years to doing everything in their power to ensure Barack Obama loses in 2012. That will obviously include doing everything they can to deny him any more accomplishments.