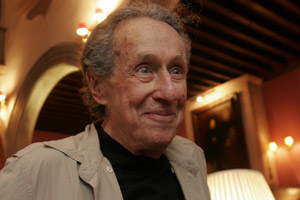 Celebrated filmmaker Arthur Penn, best known for his watershed 1967 film Bonnie and Clyde, died on Tuesday night at the age of 88. Here’s the trailer for Penn’s magnum opus:

In addition to his film direction, Penn was a pioneer of live television drama and directed a number of works for the stage, including The Miracle Worker with Anne Bancroft and Patty Duke. But he made his mark outside of the entertainment world as well, advising then-Senator John F. Kennedy during his televised debates with Richard Nixon in 1960. Penn directed the broadcast of the third debate. Dave Kehr of The New York Times writes that Penn instructed Kennedy to “look directly into the lens of the camera and keep his responses brief and pithy”—a strategy that allowed JFK to project an air of confidence that Nixon couldn’t muster.

Of Bonnie and Clyde, Kehr says:

In Mr. Penn’s hands, it became something even more dangerous and innovative — a sympathetic portrait of two barely articulate criminals, played by Mr. [Warren] Beatty and a newcomer, Faye Dunaway, that disconcertingly mixed sex, violence and hayseed comedy . . . Not only was the film sexually explicit in ways unseen in Hollywood since the imposition of the Production Code in 1934 — when Bonnie stroked Clyde’s gun, the symbolism was unmistakable — it was violent in ways that had never been seen before. Audiences gasped when a comic bank robbery climaxed with Clyde’s shooting a bank teller in the face with a shotgun, and were stunned when this attractive outlaw couple died in a torrent of bullets, their bodies twitching in slow motion as their clothes turned red with blood.

It’s still stunning, particularly given the unfrenzied pace of the scenes that directly precede it. Even though you know these two had it coming, you’re still somehow caught unaware when it comes. The movie’s bullet-ridden, kinetic sexiness presented a startlingly simple formula for instant success.

But what gives the movie its lasting appeal is its glorification of the anti-hero. Bonnie and Clyde blaze through the movie kiilling people and taking their money, with no regrets. They laid the cinematic groundword for the hippy bikers of Easy Rider, Travis Bickle of Taxi Driver, One Flew Over the Cuckoo’s Nest‘s Randall Patrick McMurphy, and others. Tony Soprano, Al Swearengen, Omar Little, and Walter White—Bonnie and Clyde’s influence on the TV renaissance of the late-1990s and 2000s is unmistakable. Our small-screen antiheroes make ugliness something to celebrate rather than shame. It’s the same thoroughly modern idea that Penn blasted across the screen in 1967.

Here’s part 2 of a series of fascinating interviews with Penn, focusing on his television career: