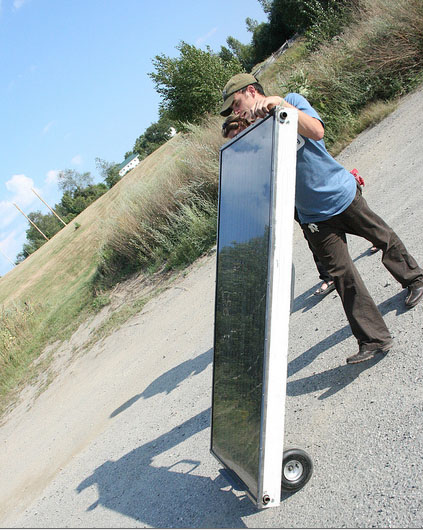 Whether Obama wants them or not, Jimmy Carter’s solar panels will soon arrive at 1600 Pennsylvania Ave. The group 350.org started a campaign in July urging the Obama administration to install solar on the White House. Today the group plans to deliver one of the original panels that the Carter administration erected in 1979 to Obama’s doorstep.

The panels, which eventually found a new home at Unity College in Maine after Ronald Reagan booted them from the West Wing in 1986, are dated but still functional. The group plans to offer one of the 6-by-3 foot panels to the White House, a symbolic move but one the group says could have real significance (they’d actually like him to install a new, more modern set of solar panels). Since the Senate put the kibosh on any hope of passing a climate bill this year, installing solar could still be a strong signal from the White House that it’s serious about action on the issue.

“We’d rather have tough climate legislation, but that’s not happening—not this year, maybe not in a couple years,” said Bill McKibben, an author, activist, and founder of 350 (and frequent Mother Jones contributor). “We have to build a real movement. This is part of it.”

The group also argues that installing new panels will raise public awareness about solar power, McKibben tells me via cell phone as the group rolls down I-95 in a van, en route to the White House. “When Michelle [Obama] planted her garden on the White House lawn, that was one reason seed sales grew the next year,” says McKibben. “This kind of stuff counts. It’s important to get it up there where people can see it.”

The group has requested a meeting with White House staff on Friday to discuss installing new panels on the building, but says they’ve so far received “no commitments one way or the other” from the administration. (Council on Environmental Quality spokesperson Christine Glunz confirmed that the group will meet with “a White House representative” to “discuss support for renewable energy.”) “They keep saying it’s complicated. That’s what we’ve heard so far,” said McKibben. “Everything is complicated,” he continued—but in this case, at least you don’t need 60 votes (a nod, of course, to the threshold to overcome the filibuster in the Senate, a number that has stymied action on climate so far.) They’ve asked for a commitment to install new panels by Oct. 10, which the group has planned as a day of action on climate change.

Of course, you can’t escape the significance of the panel’s origin. McKibben points out that they highlight the fact that solar technology is nothing new; it’s been around for 30 years. But there’s also the Carter factor; I’m guessing he’s not a president that the White House is particularly fond of thinking about these days. I asked whether there’s any concern, heading into what’s expected to be a rough election season, about calling to mind a Democratic president who was voted out of office after just one term. McKibben wasn’t too worried.

“Everybody thinks of [Carter] as ineffective, but he was able to get solar panels,” said McKibben. “It strikes me that this is one of the more popular things he ever did.”