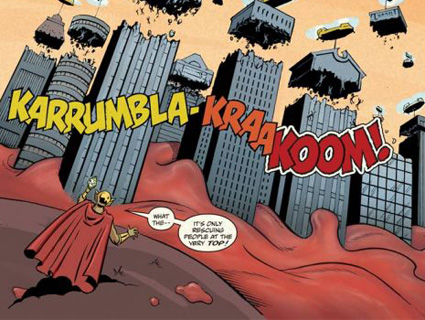 THE REMARKABLE thing about the American middle class is that we still have one, given the job losses, housing bust, and 401(k) wipeout of the past three years—and considering that for 35 years, politicians (and the bankers who own them) have been hammering away at middle-class institutions. The assault began in the 1970s, when New York City’s fiscal crisis and California’s property-tax revolt marked the start of a long decline in public services. Next came the recession and anti-union policies of the early 1980s, whose whip’s end hit the black working class especially hard. (Automakers have long been among the nation’s largest private employers of African Americans. In the late ’70s, one in every 50 African Americans in the workforce was employed in the industry.) Thanks to the UAW, the automakers provided good jobs and pensions for workers who, in many cases, had a high-school education at best. When Chrysler hit the ropes in 1979, Congress did pitch in with a $1.5 billion loan guarantee (I worked on that bill as an economist for the House banking committee), but the decade that followed still pummeled autoworkers—as they did all of American manufacturing.

The consequences are still unfolding. Total employment of manufacturing workers peaked in 1979, and three decades later, we’re in the endgame. Jobs in the sector are down by about a third since 2000—some 6 million lost. Most of them will never be replaced. Nothing can stop the Chinese, Koreans, Vietnamese, and others from making shoes and ships and sealing wax at wages we can’t compete with. And nothing will.

For a time in the 2000s, some of those job losses were offset by gains in the other hard-hat sector: construction. But the Great Recession put an end to that. Since 2007, a quarter of construction jobs have disappeared, more than 2 million in all—about as many as were lost in manufacturing, but from a much smaller base.

Those numbers tell of the next big middle-class tragedy—the housing bust. Homeownership was a great American success story. It rose for 60 years, peaking around 2004—and for most of those six decades it was an honest business, more or less. But in its last five years, the long boom was kept alive by the greatest financial swindle in world history. In the collapse that followed, an enormous amount of middle-class wealth was wiped out. Homes were once a source of pride, safety, and collateral. Now they’re often a burden—and homebuilding is at lows not seen since World War II.

Is it a shock that after the Citizens United decision, Target was among the first companies to write a huge check to a political campaign?

With manufacturing and construction on the ropes, service jobs now practically comprise the whole economy. Our rich folks today make their money in finance and technology; the upper middle class lives on trade, law, and medicine; and the middle class teaches and works in the civil service. The working class cooks, cleans, trucks, soldiers, stocks, repairs cars, makes beds, changes bedpans, and rings up sales. Today there are more salespeople, more hotel and restaurant workers, far more lawyers, doctors and accountants, and almost twice as many education and health workers as there are people producing tangible goods.

This isn’t all bad. Conditions in stores, restaurants, and hospitals are often better than in factories. Jobs are more stable because labor in these businesses is mainly a fixed cost—an assembly line can be idled at a moment’s notice, but a store needs salesclerks even when business is down. Goods made abroad are cheap, which helps consumers. The health and education sectors now have almost 30 percent more workers than they did in 2000, and that means, in part, more and better services in these areas.

The downside is that because many of these jobs aren’t unionized, wages are lousy. The only thing that reliably bolsters service wages is the federal minimum wage: When it rises, as it did from $6.55 to $7.25 in 2009, service jobs above the minimum are forced up (PDF) as well (to maintain the spread). And when Congress doesn’t raise the minimum, real wages decline with inflation.

Is it any surprise that today our leading reactionaries come from retail behemoths like Wal-Mart? Is it a shock that Target was among the first companies, in the wake of the Supreme Court’s Citizens United decision, to write a huge check to a political campaign? That fast-food chains are tenacious opponents of a higher minimum wage? That hotel owners from New Orleans (PDF) to Santa Monica (PDF) have fought against “living wage” laws? Having thwarted the unions, they now target the government—its taxes, its regulations, and above all, its wage standards.

So: Most of the nation’s remaining jobs are in services, where pay depends largely on acts of Congress. Houses are no longer valuable commodities. Private pensions are largely kaput, and many 401(k)s were also wiped out in the crash. What’s left to protect economic security for ordinary Americans?

The answer, of course, is Social Security and Medicare. They remain by far our greatest social policy achievements. Today, a 60-year-old man in the US has an expected life span of 20 more years (PDF)—well above what was the case 50 or even 40 years ago (PDF), when Social Security didn’t relieve poverty and Medicare was just getting underway. Improved medical care is surely part of that. But income security is also an important factor. People who are not poor live longer than people who are.

And Social Security prevents poverty. It’s wealth, exactly like a big bond that you can’t sell. If the monthly benefit is $1,000 and the interest rate is 2 percent, the bond is worth $600,000—and that’s a bond you own, right now. You don’t have to save for it: You’ve paid for it, up front, via the payroll tax. And there’s more. As health care expert Harold Pollack has pointed out, Social Security’s Disabled Adult Child program (PDF) is an insurance policy worth more than $400,000, protecting you if you happen to have a mentally or physically disabled loved one—something that could be only a car crash away.

Medicare has also been a huge success: popular, efficient, and less costly per “unit of care” provided than private medical care. Medicare is a big insurance policy you’ve already paid for, in full, that takes effect at 65—an age when private insurers wouldn’t touch you. That’s wealth, too, a huge buffer between sickness and bankruptcy.

Are you surprised that these programs are under attack? The same forces that went after the unions in the 1980s, that relentlessly pushed free-trade agreements while manufacturing jobs evaporated, and that destroyed housing values in the 2000s— they’re on the prowl again. If Social Security and Medicare are cut, finance and insurance companies will skim the cream—the wealthier, healthier participants—while leaving everyone else to fend for themselves. Social Security and Medicare, they think, are easy prey, once we’ve been softened up by scare stories about how they’re on the “brink of bankruptcy” and we “can’t afford them.”

It isn’t true, of course. Social Security and Medicare can’t go bankrupt, just as the Pentagon can’t. They’re not in some separate bank account or lockbox—they’re government programs that we either choose to pay for or don’t. And not only can we afford them, they’re a bargain, providing modest comfort and decent care to people who would otherwise financially burden their families—or die.

The attack will come right after the election, when the Bowles-Simpson commission on deficit reduction issues its report. It will almost surely recommend deep cuts in Social Security, probably in the form of an increase in the retirement age. This is a direct cut in benefits, targeted in an especially nasty way at minorities and all others who work harder, earn less (PDF), and live shorter lives (PDF) after retirement than, say, college professors or senators.

The cochairman of that commission, former GOP senator Alan Simpson of Wyoming, has made his views clear. In an August email (PDF) to the head of OWL (née the Older Women’s League), he called Social Security “a milk cow with 310 million tits.” He wants you to think of Social Security as welfare, not something you’ve earned—a boondoggle, rather than a program that puts money into the economy every day.

The fact is, even if you were never an autoworker, were never in a union, never owned a house, even if you’ve never been sick and never got anything else from the New Deal—whoever you are, Social Security and Medicare help you right now. They support your business: Spending by old folks is part of the income of small and large companies everywhere, an effective and stable support for the economy. Social Security provides survivors’ benefits that raise children in your schools. It will keep your parents off your back. And when you do get older, Social Security and Medicare will protect you, and they will protect your children from bankrupting themselves over you. That is, if these programs are protected, now, from their assailants.

The House has agreed to vote on the Bowles-Simpson package—whatever it eventually contains—if it passes in the Senate. So it will come down to the Senate. Will the Democrats hold the line? Or will they give in to this assault on the last bastion of the American middle class?