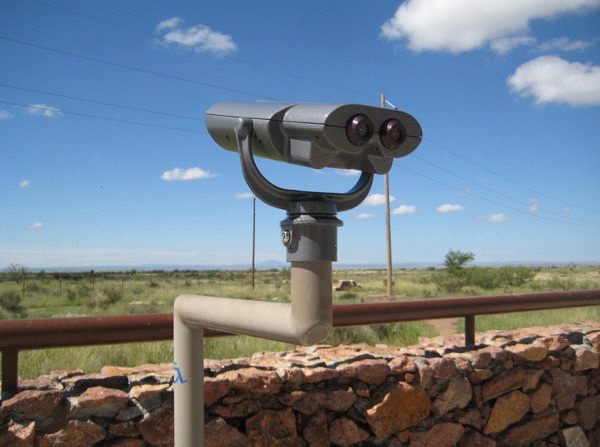 Quick: Find the extraterrestrial life form in this photograph! (Photo: Tim Murphy).Marfa, Texas—Long before it became an improbable hub for minimalist architecture, Marfa (population 2,100) was known for its lights—the oft-witnessed, never fully explained multi-colored orbs that hover and dart over the Chinati Mountains at night.

Some say the lights are the result of gases rising out of the Chihuahan desert. Others say they come from Apache campfires or visiting space creatures. In Marathon, about an hour down the road, a man named Eric suggested that the lights come from military helicopters (you can imagine how terrifying that must have been in 1883, when the phenomena was first reported.)

In 2004, a team of students from UT–Dallas conducted a four-day field study to show that the lights might come from automobile traffic reflecting from the state highway, which is totally lame, but, what’s the word, plausible?

No one ever pulled off to the side of a highway to watch car headlights, though, so Marfa is sticking firmly behind the “unexplained” aspect of the unexplained phenomenon. At taxpayer expense, Presidio County constructed a viewing platform and visitors center on the outskirts of Marfa, where out-of-towners can throw down a few quarters to try to see the lights at night. It gets brisk traffic: When we stopped by in the early afternoon (before the lights would even be visible) there were at least a half dozen people there, including a few, like Richard Brown of Odessa, who claimed to have actually seen the things.

“There’s a railroad that goes down through there, and there’s a red light that flashes,” Richard explains. He gestures across the desert to the Chinatis: “It looked like a car light comin’ down the mountain, but there are no roads up there!”

Richard’s friend, whose name I don’t catch, jumps in. Apparently he saw the lights, too—last night, after he and his buddies finished their game of cards around 10 o’clock. “I think the ones we was seein’ was over there. It was stationary, then it split up into three lights. I thought my eyes was playin’ tricks on me but I looked up at the stars, and [the lights] looked nothing like them.”

If nothing else, the lights are a nice way to put Marfa on the map for those not into minimalism or ranching, in the way that small towns across the land continuously outdo each other in the competition to get people to pull over. See the Marfa Lights! See Seven States From Rock City! Free Ice Water at Wall Drug! See the World’s Largest Holstein Cow! There doesn’t even need to be anything there to see—Rock City, just across the Georgia line from Chattanooga, is essentially a scenic overlook with a waterfall, that charges nearly $20 just to get in. Instead, the main attractions are the signs painted on the sides of barns as far away as Missouri, telling you to “See Rock City,” so that when you actually get there, you can buy a birdhouse that says “See Rock City.” But I guess it works; I mean, we stopped in Marfa, didn’t we?