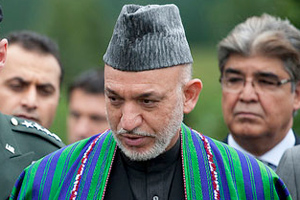 Last week, the Afghan government intervened to stabilize Kabul Bank, whose dubious off-the-books investments and shady real estate deals in Dubai could precipitate a massive bank run—or even the collapse of Afghanistan’s fragile financial system. On Tuesday, the government announced that it has frozen the assets of the banks top shareholders and borrowers “until the situation becomes clear.”

So how bad are things going to get for Afghans who have money sitting in the bank’s swiftly emptying vaults? The troubled institution has already lost some $300 million of its $1.1 billion in deposits. Last week’s revelations have led to the forced resignation of some of the bank’s top officials, including bank founder and former chairman Sherkhan Farnood, a world class poker player and owner of much of the Dubai real estate. (When the Washington Post asked about the Dubai deals in February, Farnood had this to say: “What I’m doing is not proper, not exactly what I should do. But this is Afghanistan.”) Meanwhile, government officials are denying early reports that the Afghan Central Bank will have to take over Kabul Bank. If that happens, Afghanistan could wind up begging the international community for hundreds of millions of dollars to ensure that its small businessmen and civil servants don’t lose everything in the potential run.

With the stakes so high, President Hamid Karzai and the Central Bank are working to reassure depositors, calling in $300 million in reserves to help guarantee Kabul Bank’s liquidity and injecting $100-150 million to keep the bank afloat. “No customers are leaving without their money… The situation has normalized,” Abdul Qadir Fitrat, a governor at the Afghan Central Bank, said Tuesday. Fitrat claims that Kabul Bank is still using its “own money” (as opposed to government funds) and that its customers deposited $11 to 17 million a day over the past several days.

There is no doubt that the efforts to stave off a complete financial meltdown have been aggressive. Considering how cozy the president and his crew are with the bank, which contributed large sums to Karzai’s re-election campaign, that’s hardly a surprise. Mahmoud, the President’s brother, is Kabul Bank’s third-largest shareholder, and lived in one the villas the bank bought in Dubai. (Mahmoud recently announced he’ll be vacating that pad.) But while calling in the reserves may have reassured Karzai’s buddies, the thousands of Afghans who lined up to pull their savings—and the $200 million-plus they’ve withdrawn in recent days—suggest that the state’s measures aren’t convincing the common people.

The US says that it won’t be bailing out Kabul Bank. American officials are, however, pushing for a major clean-up. That leaves Karzai relatively exposed: if he can’t dig the bank out of this hole, his credibility will continue to erode. And if Afghans weren’t sure of it before, they know now: off-the-books investments by the government with their own money have a direct and negative impact on their lives. The more Afghans are able to put together a complete picture of government malfeasance, the more troubling the long-term security picture becomes. Here’s Dexter Filkins’ grim assessment:

. . . [T]he rationalization offered by the Western official—that Afghans are happy to tolerate a certain level of bribery and theft—seems to have turned out terribly wrong. It now seems clear that public corruption is roundly despised by ordinary Afghans, and that it may constitute the single largest factor driving them into the arms of the Taliban.

UPDATE: In the Times today, Adam Ellick and Filkins chart the relationships between the bank, the brothers of Hamid Karzai and his vice president Muhammad Qasim Fahim, and the Afghan political class:

In early 2009, as President Hamid Karzai scanned the landscape for potential partners to run in his re-election bid, he was approached from an unusual corner: a bank. The president’s brother, Mahmoud, and another Afghan businessman, Haseen Fahim, were shareholders in Kabul Bank, one of the freewheeling financial institutions that had sprung up over the past decade since the Taliban’s fall. According to Afghan officials and businessmen in Kabul, Mahmoud Karzai and Mr. Fahim recommended Mr. Fahim’s brother, Gen. Muhammad Qasim Fahim, to become the president’s running mate. President Karzai agreed, and in a stroke co-opted his ethnic Tajik opposition and placated an old political foe with a checkered record on human rights and corruption. After the deal, Kabul Bank poured millions into Mr. Karzai’s re-election campaign, Afghan officials said. Mahmoud Karzai and Haseen Fahim, drawing on Kabul Bank’s resources, were able to enrich their families aided by tens of millions of dollars in loans. [emphasis added]

The Times outlines, in great detail, the odd coupling of the educated statesman Karzai and brutal warlord Fahim, and points out that the bank crisis throws a serious monkey wrench in their superalliance. For his part, Mahmoud—whose shady adventures in ill-advised investments are becoming clearer with each passing day—claims that the president’s support for General Fahim “had nothing to do” with the fact that he and the future vice president’s brother were in cahoots. “Yes, I recommended [Fahim]. . . He is a sober man, and he is very brave.”

And for brother Hamid? If he doesn’t continue to prop up Kabul Bank with public funds, he risks destroying the livelihoods of thousands of innocent Afghans. If he does, he opens himself up to accusations of political favoritism—I think the technical term for it is damned if you do, damned if you don’t.