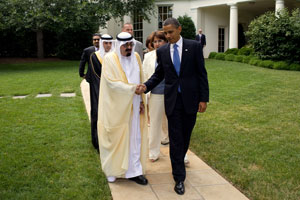 Christine O’Donnell, the 41-year-old tea party darling who won the Republican Senate primary in Delaware, has had on her campaign staff a longtime conservative activist who last year wrote an article suggesting President Barack Obama is a secret Muslim.

According to documents filed with the Federal Election Commission by O’Donnell’s failed 2008 Senate campaign and by her current campaign, Jon Moseley has worked for O’Donnell in both of these Senate bids. In a recent statement issued in support of her and disseminated by ChristianNewsWire, Moseley described himself as the manager of her unsuccessful 2008 campaign against then-Sen. Joe Biden. Moseley has also served as a campaign treasurer for O’Donnell during that campaign. [Update: Following publication of this article, Moseley said that he has had nothing to do with O’Donnell’s current campaign. But her 2010 campaign filings list a payment to Moseley; he maintained this was for money owed him from the 2008 campaign.] But Moseley is not a political operative. For decades, he’s worked for conservative policy groups. A 2008 bio noted that he has been employed by the Heritage Foundation and Judicial Watch, as well as various congressional campaigns. It identified him as the executive director of a group called American Border Control, which says it “works for 100% American control of ports of entry.” (In describing its mission on its website, the organization reports it has collaborated with anti-immigration crusader Tom Tancredo “trying to secure American borders.”)

In 2009, Moseley maintained an intermittent blog that expressed his conservative views. He defended the Bush-Cheney administration’s use of extreme interrogation methods (declaring they were not torture), hailed the tea party movement, maintained that climate change was caused by changes in the sun’s magnetic field, and contended that Obama was and might still be a Muslim.

In an article—titled “Is Barack Hussein Obama (Still) A Muslim?”—Moseley asserted that because Obama had recited to a reporter the Muslim call to prayer (which he apparently learned as a child in Indonesia) he must be a Muslim: “According to Islamic scholars, reciting this Muslim declaration of faith makes one a Muslim.” Moseley noted that “recent events” had prompted “questions about Obama’s [religious] allegiances.” This included Obama’s supposed bow to Saudi Arabian King Abdullah: “Saudi Arabia is the guardian of the Muslim holy sites of Mecca and Medina, making King Abdullah very important and revered among Muslims.” Moseley pointed out that Obama did not bow to Queen Elizabeth, “who is technically the head of the Church of England.” Maintaining that Obama attended school in Indonesia as a Muslim, Mosely noted, “Once a Muslim, always a Muslim.” He argued that Obama’s professed conversion to Christianity was not authentic. To back this up, he cited an interview Obama gave in 2004, during which he said of religious faith, “I believe there are many paths to the same place.” But, Moseley wrote, Jesus “stated there is no other way to God without him.” That is, Obama’s not a true Christian because he’s not a fundamentalist Christian. And in this case not-a-real-Christian equals Muslim.

But Moseley had even more evidence: He noted that during the 2008 campaign Obama had mistakenly said he had visited 57 of the 58 states. “While slip-ups on the campaign trail are not new,” Moseley observed, “in fact, there are 57 States in the Organization of Islamic Conference. So the number of Islamic OIC States appears to have sprung more readily to Obama’s mind than the 50 States of the USA.”

Moseley didn’t seem to be kidding.

He also dismissed Obama’s years of church-going as proof of his Christianity:

Rev. Jeremiah Wright’s church does not inspire confidence for those wondering about the authenticity of Obama’s introduction to Christianity and conversion. Trinity United Church of Christ appears to have been little more than a left-wing political club.

And Moseley explained that an undercover Muslim would have no problem attending a Christian church:

So could a Muslim attend a Christian Church for 20 years? Actually, yes. Muslims honor Jesus very strongly as a great prophet of God, really the second greatest prophet to Mohammed himself…So a Muslim could feel comfortable sitting in a “social gospel” liberal church that presents Jesus as only a good teacher, and never preaches Jesus as being God Incarnate or the Savior who died for our sins. Obama was exposed mainly to political speeches from the pulpit with a little bit of Jesus-as-just-a-good-man thrown in.

Moseley suggested that Obama had spent years in Wright’s church to hide his true self:

Islamic teaching encourages strategic deception, when necessary, to advance Islam throughout the world. It is possible that a Muslim could intentionally pose as a convert, in a church that talked about Jesus as only a moral teacher, as Muslims already believe.

Moseley’s thesis: Obama is a wily covert Muslim who spent years creating an I’m-a-Christian cover story. And that’s not all. In an article for Accuracy in Media, a conservative shop, Moseley maintained that “the forces of international communism” had “much influence” over Obama. So, in Moseley’s view, the president is a secret commie-influenced Muslim. [Editor’s note: After this piece was published, Moseley contacted Mother Jones to note that although his byline appeared at the top of this AIM website page, he did not write the item claiming Obama was influenced by international communists. But Moseley added, “I have separately wrote that modern liberals ever since the take-over by ‘the New Left’ are—without realizing it—basically espousing communist beliefs.”]

It is unclear how much policy advice Moseley has provided O’Donnell in the present campaign or the 2008 endeavor. (In 2005, Moseley, a lawyer, wrote the discrimination lawsuit O’Donnell filed against a conservative non-profit, and he did so for no fee.)  In that ChristianNewsWire statement, Moseley insisted she can become Delaware’s next senator: “Can Christine O’Donnell win the US Senate? As Christine’s campaign manager for her 2008 primary, we planned how to win Delaware against formidable Joe Biden. Those detailed plans are still valid now against an unknown Democrat County Executive.” He added:

Critics charged Christine focuses on money. Hogwash! I lectured Christine in 2005 she needed to stop helping people for free. I kept telling Christine to stop being so generous doing public relations work without getting paid.

There’s no telling what influence Moseley may have on or with O’Donnell. The O’Donnell campaign did not respond to a request for comment. Neither did Moseley.*

* Once this article was posted, Moseley claimed that he had not been contacted by Mother Jones. But email requests for comment were sent to an address listed for him at American Border Control. The invitation for him to explain his article and his relationship with O’Donnell stands.