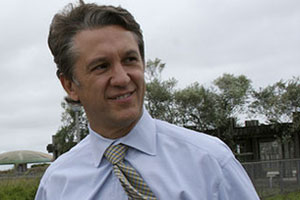 On Tuesday, Rick Lazio, the once-popular moderate GOP congressman from Long Island, lost his bid to become the Republicans’ nominee for governor of New York. Lazio will still appear on the ballot on the Conservative Party line, but crazy, racist upstate millionaire businessman Carl Paladino will be the New York GOP’s choice to take on state Attorney General Andrew Cuomo. This is both appropriate and scary.

It’s appropriate because Lazio wasn’t much better than Paladino on what became (sigh) the key issue of the primary race. During the campaign, Lazio, like Paladino, focused much of his attention on the so-called “Ground Zero Mosque,” a community and worship center that a group of moderate Muslims want to build two blocks away from the site of the September 11 attacks. (Adam Weinstein has more on all that here.) The two GOPers were basically competing to see who could better stomp on the Constitution.

Lazio referred to the project as a “trophy mosque” (implying all Muslims were responsible for 9/11) and of course claimed his opposition was “not about religion.” After all, he said, “There are many places for Muslims to pray throughout the city.” (Why should Muslims be able to pray on private property that they own? It’s not like this is America or something.) “But this site here is so close to Ground Zero,” he said, adding that “it is sacred ground.” Cuomo, to his credit, has rejected Lazio’s calls that he “investigate” the planners and funders of the so-called mosque. The “mosque” stuff is a disgusting, hateful business, and a more courageous Republican candidate wouldn’t have participated in it. I suspect Lazio wasn’t lying when he said his position on the issue was “not about religion.” Of course it wasn’t—it was about politics, and trying to convince a radicalized, rump New York GOP to nominate him. How’d that work out for you, Rick?

So there are a lot of reasons not to feel sorry for Lazio. But despite the mosque demagoguery, Lazio’s defeat is also a bit frightening. Earlier this year, I (like many others) was convinced that a solid GOP election season would mean the return of the near-extinct Northeastern moderate Republican. (Lazio was once one of these legendary beasts.) Boy, was that wrong. What’s happened instead is that tea partiers have primaried moderate Republicans all over the place. Rep. Mike Castle lost his race in Delaware Tuesday night. Lazio got crushed. Former Connecticut Rep. Rob Simmons lost to WWE mogul Linda McMahon in Connecticut. Former Rep. Charlie Bass was nearly primaried out of his bid to regain his old seat in New Hampshire. The list goes on—and pollsters, looking forward, see that moderate Maine Republican Olympia Snowe looks incredibly vulnerable to a potential challenge from the right in 2012.

While some liberals might like to root for Democrats exclusively, the continuing decline of the moderate Republican and rightward shift of the GOP is bad news for progressives—and the country. Republicans are going to run Congress—and inhabit the White House—around half of the time. It’s better for liberals if the people in the GOP are not radicals. Does that mean that liberals should always root for the more moderate GOPer in a primary? No. But liberals need to ask the hard questions about the people they’re rooting for in the other side’s primaries. Is having a good chance that Chris Coons wins the Delaware Senate seat worth the small chance that Christine O’Donnell wins it? (Perhaps) Is having an even chance that Harry Reid stays in office worth an even chance that Sharron Angle gets elected? (Harder to say.) This is a Republican year. Is any Republican, however radical, truly unelectable in this climate?1

A small chance of a Republican victory is still a chance.2 Polling guru Nate Silver has Paladino as a 300-1 underdog. Lazio was around 100-1. Is the satisfaction liberals are feeling at seeing Lazio’s mosque demagoguery prove pointless worth giving Carl Paladino a chance, however slim, of becoming governor of New York? Or put it this way: would increasing Barack Obama’s chance of winning re-election be worth giving Sarah Palin a chance, however slim, of becoming the most powerful person in the world? Liberals think she’s unelectable. But people said Reagan was unelectable, too. Celebrating the victory of the more radical GOPer in a New York gubernatorial race or a Delaware Senate race is one thing. But liberals shouldn’t make it a habit.

1Chris Matthews had a good moment Tuesday night when he pointed out that Dems once thought that Ronald Reagan and Orrin Hatch were too crazy to be elected. But Reagan won two terms and Hatch will probably be primaried from the right in 2012. And Pat Toomey, the founder of the far-right Club for Growth, looks almost certain to be elected Senator from Pennsylvania this year—just two years after the state went for Obama by ten points.

2Even in the few races where the Democrat is almost certain to win—like the New York gubernatorial race—voters are better served by Republican candidates who can articulate moderate, reasonable critiques of Democratic policy preferences. That forces Dem candidates to hone their arguments and take opposing views seriously instead of allowing them to dismiss their opponents out of hand (as Cuomo will likely do with Paladino.) The Democratic party is anything but perfect. Reasonable opposition is good for it.