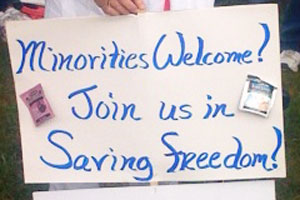 White people have never loved the black man as much as they did this weekend at the big “9/12” tea party rally in DC. After months of fending off charges of racism, tea partiers who gathered on Sunday for their second annual march on the Capitol seemed to go out of their way to prove that they’re not only not racists—they have black friends! At a rally that was mostly white, Gary Washington, an activist from the First State Patriots in Delaware, stood out as the rare black man in the crowd. Far from feeling like an outsider, though, he said, “I’ve been out socializing all day. It’s beautiful.” Lots of white people had come up and asked to have their photos taken with him. He said even more had made a point to tell him how much they appreciated his coming to the march.

As if to prove his point, an older white man walking by stopped to slap Washington on the back and give him a hug. Bill Alford, a self-proclaimed hillbilly from Tennessee declared, “We’re not racists.” He chatted up Washington like they were old friends before heading off. They had just met.

Rockville, Md. resident Dean Cowan, hiding behind sunglasses and reclining in a lawn chair Sunday, said that he had a similar experience last year. He drew lots of attention from white activists at the rally, but that was in part because he was carrying a sign adorned with a picture of Nancy Pelosi with a mustache. This year he was keeping a lower profile. Still, while no one had approached him, Cowan said that he could see people walking by give him a little smile like they “want to connect. Last year I was more open to that. This year, I don’t really want to make a statement. I just want to listen.” Unlike Washington, he thought the crowd was whiter (and also smaller) than it was last year. “I don’t know where all the minorities are,” he said with a laugh. But he didn’t care. “I love being around like-minded people. I have so many reasons to be here. I hate Obamacare.”

Not all the black people on hand received such a warm reception, at least not at first. A bunch of African-American guys from Boss Group Ministries had come up from Florida and were handing out flyers that said, “SAVE BLACK PEOPLE FROM DEMOCRATS WHO STARTED THE KKK.” The flyers reminded readers in very small print that the late Sen. Robert Byrd (D-W.Va.), who endorsed Obama, had been the Grand Cyclops of the KKK. The men were wearing “God’s Tea Party is Not Racist” T-shirts, but the tea partiers were still eyeing them as if they might well be those nasty New Black Panthers Glenn Beck warned might be around to cause big-time trouble. To be sure, one guy in aviator sunglasses and Afro did look like a vintage 1970’s black nationalist. But once people saw “KKK” and “Democrats” in the same sentence, they warmed up to him. He told me he was there because the tea party wasn’t racist and because his group just wanted to see black and white people come together. And what better place to do that than a big tea party rally in DC?

Speakers at the rally mimicked the individual tea partiers’ love for minorities (except for some of those illegal Latino immigrants who aren’t paying income taxes). People like Andrew Breitbart gave the requisite speeches about how Katie Couric and the mainstream media invented tea party racism. Despite all the red meat queued up for the crowd, the 9/12 march was distinctly smaller than last year’s. When tea partiers came to Washington on 9/12 in 2009, their huge numbers caught the political establishment off guard. The day became legendary in tea party annals and a sacred date for the fledgling grassroots movement.

Organizers from the advocacy group FreedomWorks, headed up by former GOP House Minority Leader Dick Armey, and various tea party groups, were clearly hoping for similar results this year. But judging from the turnout, that didn’t happen. In some ways, Sunday’s crowd size demonstrates just how much of an influence Fox News star Glenn Beck has on the burgeoning tea party movement. Last year, he heavily promoted the 9/12 march on his show, and many attendees attributed their presence in Washington to his encouragement.

This year, however, Beck decided to stage his own rally in Washington. That event, held just two weeks ago on the steps of the Lincoln Memorial, drew tens of thousands of people who might otherwise have come to the 9/12 march. Beck seems to have sucked the wind out of the tea party rally. The smaller turnout may also reflect the fact that tea partiers are tired of marching. While last year, the 9/12 rally was packed to the gills, standing room only, this year, people came with lawn chairs and spread out on picnic blankets like they were going to hear Tony Bennett at Wolf Trap. But activists say that a lot of those folks who didn’t come are back home working feverishly to get conservatives elected in November.

Given how close the rally is to several key primaries—Washington himself planned to campaign for tea party fav Christine O’Donnell in her insurgent run against incumbent moderate Sen. Mike Castle in the Delaware GOP primary Tuesday—activists may simply be turning their energy towards getting out the vote. If they succeed, no one will much care that this year’s 9/12 march turned out to be a little smaller than last year’s.