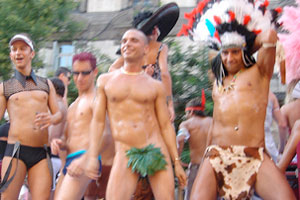 This is how Judge Carey Holliday apparently thinks all gay people look, all the time. | Flickr/<a href="http://www.flickr.com/photos/joeyelmolar/23234281/">sagarmin</a> (<a href="http://www.creativecommons.org">Creative Commons</a>).

Lest you are having some nostalgia for the Bush administration as the midterm elections approach, here’s a good example of yet another way that administration’s legacy is still screwing up people’s lives.

Last week, the 11th Circuit court of appeals reversed a truly dreadful decision by a federal immigration judge installed during the heyday of Attorney General Alberto Gonzalez, who helped turn the Board of Immigration Appeals into a dumping ground for unqualified political hacks who couldn’t get confirmed to other federal courts. The case involves a Serbian immigrant who was seeking asylum in the US on the grounds that he was persecuted in Serbia for being gay. Mladen Zeljko Todorovic came to the US in 2000 as an employee of a cruise ship and ended up staying here to avoid anti-gay persecution back in Serbia, where he claimed to have been raped while in the military and harassed by the police.

He applied for asylum, which was ultimately denied for a variety of technical reasons. But during Todorovic’s removal hearing, Miami immigration judge Carey R. Holliday said Todorovic’s claims of persecution were “highly suspect” because Todorovic simply didn’t look gay. Apparently Holliday thought that unless Todorovic was wearing a dress, there was no way the police or military thugs would have known to single him out for abuse. According to the 11th circuit opinion, Holliday said during the hearing:

The Court studied the demeanor of this individual very carefully throughout his testimony in Court today, and this gentleman does not appear to be overtly gay…it is not readily apparent to a person who would see this gentleman for the first time that, that is the case, since he bears no effeminate traits or any other trait that would mark him as a homosexual.

Holliday ordered the man sent back to Serbia, a decision upheld by the Board of Immigration Appeals. Todorovic took the case up the federal judicial food chain, arguing that Holliday’s conclusions were based solely on specious stereotypes and not in actual fact as required by the law. The 11th Circuit heartliy agreed. Writing for the court, Circuit Judge Stanley Marcus said:

After thorough review, we conclude that the IJ’s decision was so colored by impermissible stereotyping of homosexuals, under the guise of a determination on “demeanor,” that we cannot conduct meaningful appellate review of that decision, or of the BIA’s opinion essentially adopting it.

For this sort of quality judging in the immigration system, we have George W. Bush to thank. Holliday was appointed in 2006 at the peak of the Bush administration’s illegal efforts to stack the courts with GOP loyalists rather than nonpartisan civil servants. Holliday certainly fit the profile. He was one of about 20 judges whose appointments came under scrutiny by the Justice Department’s inspector general in his investigation into the department’s politically based hiring practices. Holliday was a Louisiana delegate to the Republican convention in 2004, where he made headlines for trash-talking former Mother Jones editor Michael Moore, who was at the convention filing dispatches for USA Today. He told the New York Daily News:

I would be delighted if he slapped me. Because I could defend myself, and it would all be on camera. He’d be hit from so many angles—he’d never catch me. Four hundred-pounders move very slowly and with no wind at all. I’m 53 and in good shape.

As an immigration judge, Holliday made news in 2008 when he denied a request by a Bolivian family to hear their claim that immigration officials had unfairly targeted them for deportation because their daughter was an activist campaigning for passage of the Dream Act. In denying their claim, Holliday wrote that the daughter “freely chose to draw unwanted attention to herself and her family…People who live in glass houses should not throw stones.”

Holliday had no immigration law experience before taking the judgeship, and last year, an anonymous Justice Department official told the Daily Journal that Holliday was unqualified for the position. In December 2008, a day before the end of his two-year probation period in immigration court, Holliday abruptly quit the bench, a sign, perhaps, that he knew what was coming. But judging from the Todorovic case, his legacy is going to linger for years to come. Meanwhile, Holliday’s connections seem to have taken him back to Louisiana. He’s now a state workers compensation judge, where he can use his special observation skills to decide whether or not claimants look sufficiently injured to get compensated for getting hurt on the job.