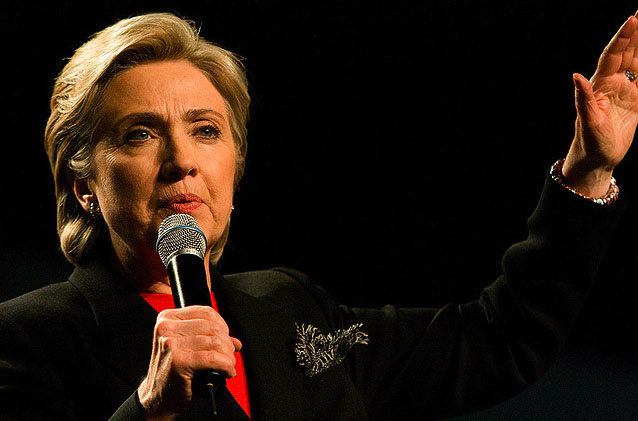 Secretary of State Hillary Clinton has been pretty quiet about the proposed TransCanada XL pipeline, a 1,661-mile system that would carry oil from Alberta’s tar sands all the way to refineries in Texas. Environmental groups have raised concerns about yet another pipeline that would bring tar sands oil, which has a larger carbon footprint than conventional sources, to the US, and about the proposed path it would blaze across the US. And between the BP spill in the Gulf and another major pipeline rupture in Michigan in July, there has been increasing anxiety about the expansion. The fate of the pipeline now lies with the State Department, and while it’s not expected to make any final decisions about the project until early next year, Clinton signaled Tuesday that the pipeline is likely to be approved.

“We’ve not yet signed off on it,” said Clinton in remarks at the Commonwealth Club of San Francisco. “But we are inclined to do so and we are for several reasons.”

Her remarks were somewhat confusing, as they came in response to a question about the Alberta Clipper pipeline, yet another line running from Alberta to the US border that was approved in 2009 and is already up and running. It’s the latest proposed pipeline from Canada, TransCanada’s Keystone XL, that is generating controversy these days as environmental groups and landowners push back on the proposal. Recent press accounts have indicated that the pipeline would likely be rejected, but Clinton’s remarks seem to indicate that it, too, will get a green-light from the federal government.

Here’s the exchange; make of it what you will:

Question: Another international issue that you signed in on last year was the Alberta Clipper, a pipeline from Alberta that brings tar sands, oil sands directly into Wisconsin to the U.S. Midwest. This is some of the dirtiest fuel in the world. And how can the U.S. be saying climate change is a priority when we’re mainlining some of the dirtiest fuel that exists. (Applause.)

Secretary Clinton: Well, there hasn’t been a final decision made. It is –

Question: Are you willing to reconsider it?

Secretary Clinton: Probably not. (Laughter.) And we – but we haven’t finish all of the analysis. So as I say, we’ve not yet signed off on it. But we are inclined to do so and we are for several reasons—going back to one of your original questions—we’re either going to be dependent on dirty oil from the Gulf or dirty oil from Canada. And until we can get our act together as a country and figure out that clean, renewable energy is in both our economic interests and the interests of our planet—(applause)—I mean, I don’t think it will come as a surprise to anyone how deeply disappointed the President and I are about our inability to get the kind of legislation through the Senate that the United States was seeking.

The remarks are more interesting today, as a letter from Nebraska Gov. Dave Heineman to Clinton expressing concerns about the project also came to light. In the letter, Heineman urges Clinton to ensure that “Nebraska’s natural resources are protected” as she considers the proposal. “Almost 300 miles of the proposed pipeline will come through Nebraska and be situated directly over the Ogallala Aquifer,” he wrote, adding that the resource “is a lifeblood of Nebraska’s agriculture industry.”