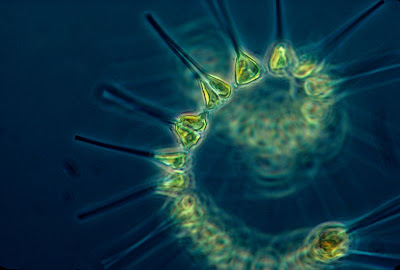 The ocean just got richer than we ever imagined—thanks to a new flow cytometer that measures the size and pigment composition of every phytoplankter present in a sample of seawater at the mind-blowingly fast rate of thousands of cells per second.

With that stream of data, researchers from the University of Washington found that communities of phytoplankton south of Vancouver Island, British Columbia, are big players when it comes to carbon: sequestering up to 50 percent of atmospheric carbon dioxide in the ocean. 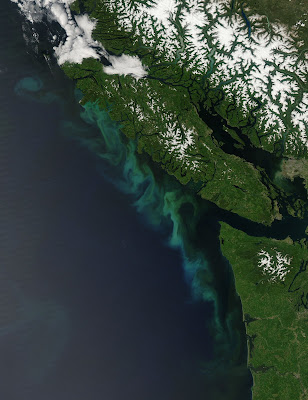 Typically biologists with traditional cytometers look for phytoplankton using tablespoon-sized samples of seawater collected 10 to 50 miles or more from each other.  But the new instrument, SeaFlow, samples seawater continuously, making it possible to analyze samples either every three minutes or else two samples per mile traveled. It does this by tapping into the systems aboard most oceanographic research vessels that supply running seawater to the wet labs. 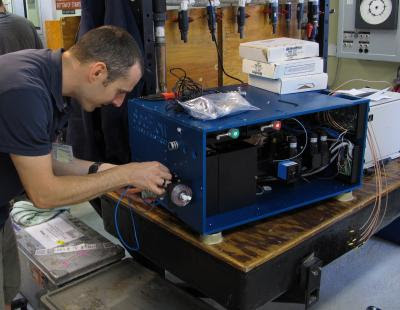 (François Ribalet prepares the SeaFlow at the start of a recent expedition. Photo courtesy the University of Washington.)

The new technology collects more samples in a day than most scientists normally gather on an entire cruise. It also sorts the phytoplankton into distinct communities, completing work in five minutes that takes two months with traditional cytometers and microscopes. 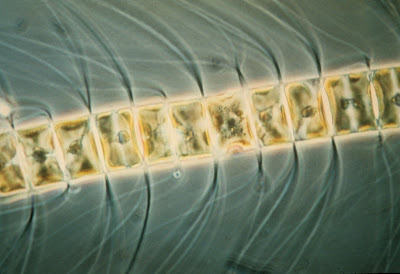 (Phytoplankton. Photo courtesy the NOAA MESA Project.)
A prototype of the device revealed a biological hotspot off Vancouver Island and—for the first time—a marine ecotone, something oceanographers knew must exist but had no way to locate before now.
Ecotones are areas where different habitats overlap, where a prairie and forest meet, for example, or a river and estuary intersect. Ectones are rich with species because plants and animals from both ecosystems might be found there, along with those adapted specifically to the hybrid environment. The ecotone discovered by François Ribalet and colleagues is a 40-mile-wide region where ocean water rich with nitrates met coastal water rich with iron. 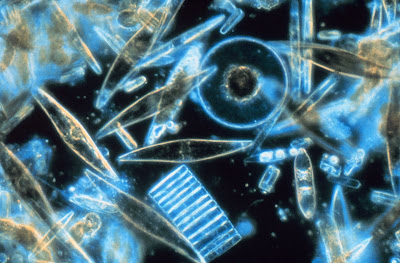 Here, Ribalet et al found not one but five oceanic phytoplankton communities, each taking advantage of the concentrations of carbon and nutrients.

“This was just unexpected diversity,” Ribalet says. “It flies in the face of the textbooks.” 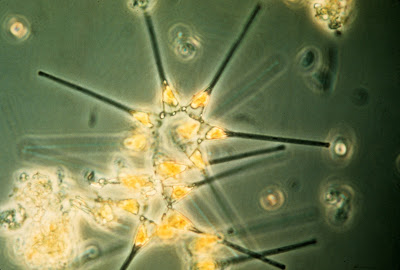 “We thought that had to be a mistake at first,” says Ribalet. “They are such small cells to do so much.”

Here’s the abstract of the paper in PNAS:

In terrestrial ecosystems, transitional areas between different plant communities (ecotones) are formed by steep environmental gradients and are commonly characterized by high species diversity and primary productivity, which in turn influences the foodweb structure of these regions. Whether comparable zones of elevated diversity and productivity characterize ecotones in the oceans remains poorly understood. Here we describe a previously hidden hotspot of phytoplankton diversity and productivity in a narrow but seasonally persistent transition zone at the intersection of iron-poor, nitrate-rich offshore waters and iron-rich, nitrate-poor coastal waters of the Northeast Pacific Ocean. Novel continuous measurements of phytoplankton cell abundance and composition identified a complex succession of blooms of five distinct size classes of phytoplankton populations within a 100-km–wide transition zone. The blooms appear to be fueled by natural iron enrichment of offshore communities as they are transported toward the coast. The observed succession of phytoplankton populations is likely driven by spatial gradients in iron availability or time since iron enrichment. Regardless of the underlying mechanism, the resulting communities have a strong impact on the regional biogeochemistry as evidenced by the low partial pressure of CO2 and the nearly complete depletion of nutrients. Enhanced phytoplankton productivity and diversity associated with steep environmental gradients are expected wherever water masses with complementary nutrient compositions mix to create a region more favorable for phytoplankton growth. The ability to detect and track these important but poorly characterized marine ecotones is critical for understanding their impact on productivity and ecosystem structure in the oceans.

Plankton Party from Asteroids on Vimeo.
The paper: