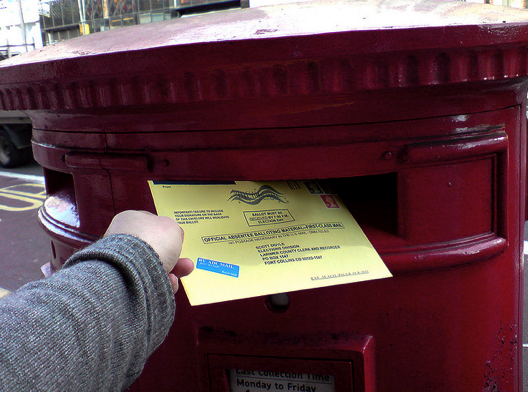 A voting rights lawyer has filed a complaint with the Department of Justice that elderly black voters are being harassed and intimidated at their homes in eastern Texas. Gerry Hebert, executive director of the Campaign Legal Center, submitted a complaint on Thursday to the DOJ claiming that at least seven elderly black voters “were being harassed by two unidentified white women” who visited their homes in Bowie County to question them about their mail-in ballot applications. The women are described as middle-aged, local Republican activists who had accessed publicly available information about which voters had requested mail-in ballots.

The complaint claims that the women showed up unannounced this week at the home of 78-year-old Willard Wherry, of Dekalb, who had voted by mail. The pair proceeded to grill Wherry about who had helped him to fill out his mail-in ballot, repeatedly questioning whether anyone had showed up at his home to assist him. “We are just trying to be sure no one is trying to coax someone to vote,” one of the woman said, according to Hebert’s complaint.

The women then went to a local senior citizens center to question whether five residents had received improper assistance in voting, as well as the home of L.E. Bohannon, a 79-year-old African American voter from DeKalb, the complaint says: “Then they pulled out a copy of form with his signature on it and they asked if that was his signature. They asked him who helped him fill out the form.” Molly Beth Malcolm, a local Democratic consultant, spoke directly with some of the alleged victims and claims the incidents are racially discriminatory. “They’re not going around to older Anglos, but the African-American community,” she says.

Hebert maintains that the unsolicited home visits constitute voter intimidation intended “to create a chilling effect on most of these disabled and or elderly who received assistance in voting by mail.” His complaint continues that “a group of Republicans are checking on ballots by mail and working with group out of Austin to be sure there is no voter fraud,” citing a conversation with Bowie County Elections Administrator George Steagall. Hebert also brings up reports of other harassment, including an incident in which Natalie Nichols, a GOP candidate for Bowie County Clerk, had recently threatened a Bowie County elections official over mail-in ballot fraud.

According to a signed statement by the official, Lacey Golden, Nichols came to the election office on Oct. 15 and asked whether she had verified the signatures on the envelopes of mail-in ballots. When Golden told her it was not her responsibility to do so, Nichols grew incensed, according to her statement:

She told me I was committing fraud by letting that happen, and she had called the [Secretary of State] about it already… I said that we follow the laws and that is the rules we follow. I went to get a file folder for her public info and she followed me and got real close to me and grabbed my arm and told me I better call the SOS to protect myself in a hushed voice… I feel she personally threatened me and severely invaded my personal space.

Nichols, who is running against incumbent Velma Moore, a black Democrat, did not respond to repeated request for comment.* The complaint alleges that Kathy Hicks—a local Republican activist that Hebert had previously accused harassing Texarkana City Council member Willy Rae—was also involved in the home visitations.

Local Republican officials deny any knowledge of or involvement in alleged voter intimidation. Ken Autrey, chair of the Bowie County Republican Party, told Mother Jones that he “was not aware of anyone going to somebody’s home” to check on voters. Autrey says that he had told Steagall, the county elections administrator, that “an unusually high amount of mail ballots had been requested.” But he denied that any GOP officials were involved in an organized effort to combat voter fraud. “We’re focusing on getting our candidates elected—we’re not undergoing any kinds of efforts going after voter fraud,” Autrey says.

It’s not the first time that complaints about both mail-in ballot fraud and political intimidation have surfaced in Bowie County. In 2004, Councilwoman  Ray and her granddaughter plead guilty to mishandling mail-in ballots for homebound senior citizens, having mailed them for voters after they were filled out. The two were fined $200 and given probation but later joined a multi-claim suit challenging the state’s interpretation of the Texas Election Code, claiming that the mere possession of another person’s ballot alone does not constitute voter fraud.

“It has been the practice for elderly people to have churchgoing neighbors or friends next door to come over and help them,” says Hebert, who represented Ray and her granddaughter in the suit. “The person would mark the ballot and say, drop this in the mail for me.” In 2008, a settlement was reached: in exchange for the plaintiffs dropping their complaints, the Texas Attorney General and Secretary of State agreed to give “less consideration” to complaints of mailing a ballot for another voter, acknowledging that such assistance to elderly or disabled voters did not suggest voter fraud without additional evidence of wrongdoing.

Nevertheless, despite scant proof of massive voter fraud in the state, Texas Republicans have not let up on their crusade to root out electoral wrongdoing—this time assisted by conservative tea party-aligned activists. In recent weeks, tensions have flared in the Houston area over alleged voter intimidation and misinformation campaigns at polling stations. In the latest incident, a fake group targeting black voters distributed flyers outside a Houston-area polling station with misleading information about voting Democratic.

In the Texarkana area, Democratic consultant Malcolm acknowledges that local Republican officials have rejected such tactics, claiming that those responsible are “more of your right-wing renegade” conservatives. When asked about the alleged home visits and intimidation, Jeff Akin, coordinator of the tea party group Texarkana TEA Patriots, reponded that he believed local county officials were perpetrating election fraud in the area: “I have heard reports of voter fraud in Bowie County. I have even seen the documents myself and to the untrained eye it looks as though an elected official in Bowie County could be involved in the alleged voter fraud.”*

*Akin’s remarks have been updated. Nichols later replied in an email: “Since I turned over evidence to Federal and State law enforcement agencies quite some time ago, I am not at liberty to comment on this issue at this time,” calling the accusations against her “absolutely false and libelous.”