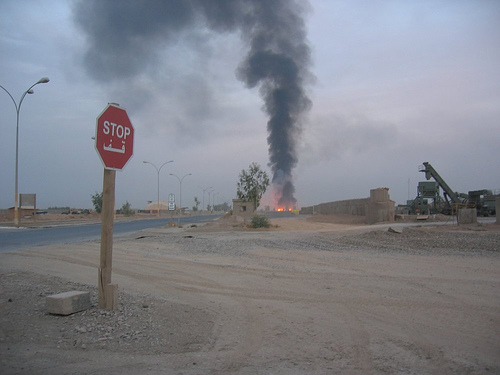 The US military's burn pit at Joint Base Balad, north of Baghdad, Iraq. <a href="http://www.flickr.com/photos/octal/114219968/">Ryan Lackey</a>/Flickr Commons

You expect a lot of possibly fatal hazards in a war zone. But burning trash? Since the start of America’s conflicts in Iraq and Afghanistan—and long before that, actually—the US military has built massive burn pits to dispose of its garbage. Mother Jones, among others, has covered the toxic brew of fumes blowing over Western troops and local citizens alike, a new Agent Orange-style killer of lung and brain cells.

The government’s finally getting a clue. Two years after three Democratic congressmen first demanded a probe, the Government Accountability Office issued a report this week slamming the DOD for its burn pits, saying they’re disease generators that flout the military’s own extremely loose health and environmental standards. “Since 1978, DOD has recognized that burning waste in open pits is not environmentally acceptable,” the GAO says, “but DOD has been slow to implement alternatives or fully evaluate their benefits and costs.” Check out video of an Iraq burn pit in action, along with details from the report, below.

The GAO investigation is a hell of a read: Apparently US troops produce an average of 10 pounds of trash per person per day, and much of it ends up set on fire in a sand berm. Since “U.S. environmental laws such as the Clean Air Act and the Solid Waste Disposal Act do not generally apply overseas,” the military makes up its own burn-pit guidelines…and can’t even hurdle those low bars. Military rules don’t even “explicitly state that burn pits should be sited so prevailing winds carry smoke away from occupied areas,” the report says, adding: “We determined that operators at all four of these burn pits burned varying amounts of plastic—a prohibited item that, according to EPA, can produce carcinogens when burned.”

Of course, many of these pits are run by you-know-who: KBR, the military’s top logistics contractor in Iraq, which collects fat fees for idle mechanics and is no stranger to toxic-poisoning suits from soldiers and ex-employees. Their burn-pit accountability: zero. “KBR officials at Taji said the company does not maintain data on items burned in the Taji burn pit because it is not contractually required to do so,” the GAO report said. “However, KBR employees told us they do burn plastic at Taji.”

Ah, yes. It’s not in the contract—but sho ’nuff it’s in your lungs!

If you’re still wondering what a war-zone burn pit is all about, here’s a video of some Marines trashing their gear in an Iraqi inferno. Warning: Some language is NSFW. Unless, of course, you’re a Marine.