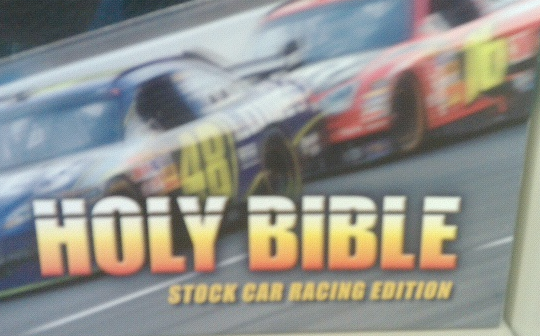 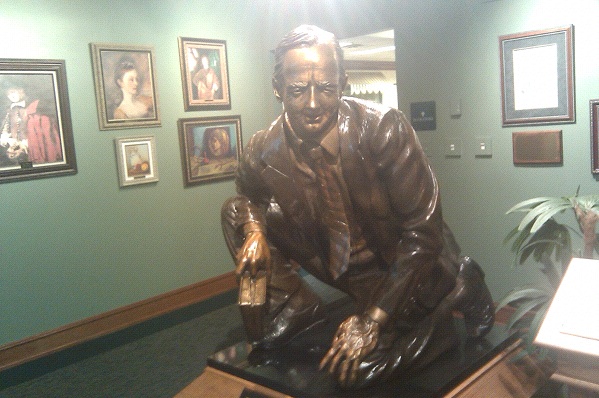 Colorado Springs, Colorado—In the visitor center at Bob Jones University, you may recall, there was a portrait of the school’s founder dressed as Shylock from Merchant of Venice. Well, Focus on the Family has a thing for Rembrandts. Or faux Rembrandts, rather. There are a half dozen of them, filling an entire wall at the organization’s Colorado Spring headquarters.

In fact, the salient feature of the Focus on the Family visitors center is the extent to which everything there seems to mimic something entirely different.

Take a walk through the bookstore and you’ll find all kinds of efforts to reshape popular culture. A sampling: a book for teens called Walking With Frodo A Devotional Journey Through The Lord of the Rings; a Twitter-themed t-shirt, with a white dove, olive branch in mouth, asking “Who Do You Follow?”; A “Lifeguard” t-shirt with the tagline “Mine Walks on Water”; a “Called to Duty: Weapon of our Warfare” t-shirt; and a whole rack of apparel that might best be categorized as Christian skaterpunk. There are Bibles, too—Good Books with faux-pigskin covers and a mock-NFL logo on the front, and a Holy Bible: Stock Car Racing Edition I still regret not purchasing. These all live next to the hardcovers warning about the dangers of sleep deprivation, the manuals for how to stay Christian through public schools, the guides for men by women trying in vain to help men understand women (and vice versa), the Left Behind series, Tony Dungy’s book, and the collected works of Stan and Jan Berenstain.*

The idea behind Christian pop culture, insomuch as it’s riffing off of mainstream pop culture, is that there’s a value added when you inject faith into the mix. So take power chords, and then add the Lord, and you should have just doubled your listening pleasure in one easy step. Except, instead you get Creed. Anyways, Rosin has some more developed thoughts on the subject, so I’ll just direct you there. And on a somewhat related note, check out Daniel Radosh’s piece in the New Yorker a few years back on Bible publishing—a $500 million industry.

*Now that Sesame Street is apparently too salacious, and Arthur‘s off-limits because his friend Buster has two mommies, I’m just happy to see that there is at least some remnant of my formative years that’s safe for public consumption.