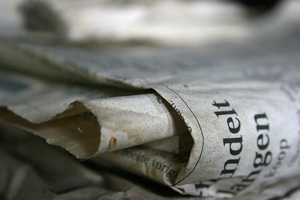 New media platforms have empowered ordinary citizens to take reporting, transparency, and accountability into their own hands. They’ve also enabled politicians to get their message out and energize partisans without ever having to deal with traditional media or tough questions. That’s how we ended up with candidates like Sharron Angle, Rand Paul, Christine O’Donnell, and Sarah Palin, who avoid traditional media almost entirely. Candidates are taking their media-dodging to almost absurd heights: Joe Miller, the tea party Republican candidate for US Senate in Alaska, said last week that he would no longer answer any media questions about his personal or professional background. That’s probably the root cause of this:

The editor of the Alaska Dispatch website was arrested by U.S. Senate candidate Joe Miller’s private security guards Sunday as the editor attempted to interview Miller at the end of a public event in an Anchorage school.

Tony Hopfinger was handcuffed by the guards and detained in a hallway at Central Middle School until Anchorage police came and told the guards to release Hopfinger.

Hopfinger has not been charged but the owner of the Drop Zone, the private security firm that’s been providing Miller’s security, accused Hopfinger of trespassing at the public event, a town hall sponsored by the Miller campaign. The owner, William Fulton, also said Hopfinger assaulted a man by shoving him.

Anchorage Police who responded to the call said they would leave it to the District Attorney’s office to decide whether to prosecute. They spent more than an hour taking statements, then left.

If Miller had more interaction with national or even Alaska-based media, he would have already had to deal with the questions that Hopfinger was trying to ask. There would have been much less incentive for the blogger to try to chase him down at a public event. I understand that such confrontational tactics make politicians feel uncomfortable. But if candidates are unwilling to answer questions about the most controversial parts of their records and backgrounds, what are reporters supposed to do? Just move on to something else? Yup.

Candidates ignore the press because, well, it works. The economic pressures on reporters—especially newspaper reporters—create an overwhelming incentive to move on to something else if you can’t get the story on the double. After all, there will always be a PR guy willing to hand you a story that you can do quick-and-dirty. Here’s Columbia Journalism Review’s Dean Starkman on the media “Hamster Wheel”:

[W]e are living in a time of P.R. ascendance. In their recent book, The Death and Life of American Journalism, Robert W. McChesney and John Nichols estimate that, even in the 1970s, when newspapers were in their heyday, the percentage of news generated from press releases was in the 40 percent to 50 percent range, a fair-enough guess. Since then, while journalism has withered, P.R. has bloomed like a rash. The authors document that in 1980, the ratio of P.R. people to news reporters was manageable, about 0.45 P.R. specialists and managers per 100,000 population to about 0.36 journalists. Today, P.R. towers over journalism, with 0.90 pros per 100,000 to just 0.25 journalists.

Now, apparently, the flaks have security goons to make sure candidates don’t have to answer questions the flaks don’t want them to answer. You should read Starkman’s whole piece—it demonstrates how media companies are complicit in the demise of their influence. But here’s the bottom line: every year, the media beast needs more copy, reporters have less time and fewer resources, and politicians and their PR teams have more power. And if politicians don’t have to answer the New York Times‘ questions, they’re sure as hell not going to answer yours.