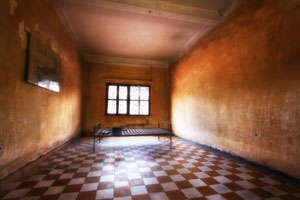 Finally, it seemed, the moment had arrived. The jury pool had been whittled down to 65, the final voir dire was set to begin, and lawyers on both sides were ready with their opening statements. Anticipation was high, and so, clearly, was nervousness. For the first time in more than a year of pretrial hearings, security held the press and observers on the ground floor of the federal courthouse in Lower Manhattan. Anyone who took the elevator to the 26th floor without clearance from the US Marshalls was turned away.

By 10:00, the reporters and observers had gone through the newly installed screening booth outside the courtroom and the defendant had entered the courtroom wearing a light gray sweater and a blue and gold tie that matched the hues of the Department of Justice emblem on the carpet. The hush in the packed room underscored the shared recognition of the moment’s significance—the start, finally, of the first Guantanamo trial in US courts, just a few blocks away from Ground Zero.

As we waited, a young woman approached the press and began to hand out xeroxes. “All rise,” the clerk announced. And then, from the bench, Judge Lewis Kaplan issued the decision we had all been awaiting, the crucial ruling on whether the government could call a witness whom it had located only as a result of torture. “The Constitution does not permit” the witness to testify, the judge asserted, given that torture evidence is not allowed in US court proceedings.

We knew that. Didn’t we? We knew that torture was against the law and that its use during the Bush years was a violation of fundamental constitutional principles. President Obama reminded us. So did Attorney General Eric Holder. But what we didn’t know was that this principle would have any real-world consequences. We didn’t know whether a judge, charged with enabling this first Guantanamo case to go through the system, would make such a ruling.

Ahmed Khalfan Ghailani, a 30-something Tanzanian (no one seems to know precisely how old he is), stands accused of being involved in the attack on the US embassies in Tanzania and Kenya in 1998, bombings that resulted in hundreds of deaths. The outcome of his trial will likely determine the prospects for other Guantanamo detainee trials, including that of Khalid Sheikh Mohammed, believed to be the mastermind of 9/11. So the judge’s decision would dramatically affect not just this trial, but all of those potential future trials, too.

“The government has failed to prove that [the witness’] testimony is sufficiently attenuated from Ghailani’s coerced statements to permit its receipt in evidence.” The air in the courtroom suddenly became even more still as the spectators absorbed the fact that the fact of torture could have a practical, and possibly devastating, impact on the institutions it touched. For the judge, it seemed an incontrovertible conclusion.

And yet, the gallery’s sigh of relief still hanging in the air, Judge Kaplan sent out a warning that this was not a case like any other. Ghailani’s “status as an ‘enemy combatant’ probably would permit his detention as something akin to a prisoner of war until hostilities between the United States and al Qaeda and the Taliban end even if he were not found guilty in this case” (emphasis mine). Ghailani, in other words, could face life imprisonment even if he were acquitted.

For civil libertarians, it was a classic good news/bad news day. The good news was that a court had ruled that the government would pay a price for torture—maybe not in punishments for those who devised the policies, but in significant setbacks for its prosecutions of alleged terrorists. Today, torture met its first institutional, legal rebuke.

The bad news is that this is only the tip of the extra-legal iceberg. The law can be twisted in other ways—outside of the realm of torture—to accommodate the government’s unique treatment of Guantanamo defendants, including the possibility of post-acquittal detention.

For now, rather than worry about the latter, I prefer to relish the former. Eventually, we’ll have to worry about post-acquittal detention. For now, let’s accept the giant step that Judge Kaplan took for us all in pointing out that indeed, to this day, torture is against the law.