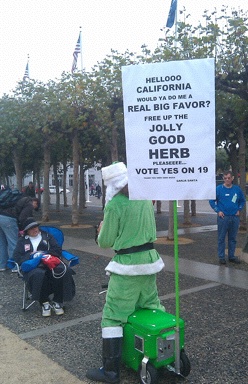 Photo: Tim MurphyThe most dedicated progressive activist of the 2010 election cycle might be a 63-year-old hippie from Dayton named “Ganja Santa.” Ganja (needless to say, a stage name), spent Saturday’s Sanity Rally in San Francisco alternatively posing for pictures in a pot-green Santa suit, and riding around Civic Center Plaza on a beer cooler that’s been retrofitted with handlebars and four wheels (a nifty contraption he calls “the cruiser cooler”).

He moved to California earlier this year solely to help rally support for Proposition 19, the California ballot provision that would legalize Marijuana. “I was in Dayton, and I just thought, ‘Man, if I’m sittin’ here and Prop 19 fails, I’ll never forgive myself,” he said. On Wednesday, win or lose, Ganja Santa will pack up his belongings and return to Ohio.

It’s the kind of commitment, if not necessarily the kind of outfit, Democratic campaigns wish they had more of in 2010. By now, you’ve probably read about yesterday’s big Comedy Central rally on the Mall (or as MoJo‘s Suzy Khimm put it, “Ironypalooza”). Like any half-decent Tea Party-spinoff, though, the DC rally was only a part of the story; statellite viewing parties sprang up in dozens of cities, from the usual suspects (Seattle, Chicago) to the less so (Rapid City, South Dakota, home of the world’s most sinister Richard Nixon statue).

In San Francisco, the crowd of about 700 that showed up to watch the main event on the big screen left as soon as it ended, opting not to stick around in the drizzle for the scheduled stand-up comedians, mime troupe, costume contest, and lecture on the virtues of “non-violent communication.”

I’d only been at the rally for a few minutes when I was handed a card by a man walking through the crowd: “Method for a Successful Conversation about Politics.” The first step began as follows: “You should not try and persuade the other person of your point of view.” The second step began, “If you are not getting anywhere assume that either you need to be clearer with your questions…” There was no third step.

It was message I heard over and over from attendees. Cheryl Schnachter drove five hours from her home in Humboldt County to show her support for civility. “We’re passionate about people being sane” she told me. “We’re really freaked out by the fear people—we’re fearful of the fear.” Still, she said, there were a few attendees didn’t “get it,” opting instead to impress their own views on others; that’s not what sanity is all about.

Kathy Causey, who stood stoically with a giant stuffed spider on her head and a veil made out of black webbing—because we’ve been “ensnared” by corporate cash—drove four hours to be here from the Sierra Nevada foothills. “I feel like there’s been a public, media lynching of Barack, and only the Tea Party is getting influence,” she said.

“I feel like having everybody here is a statement of ‘We the People.'”

That Kathy would adopt a signature phrase of today’s conservatives shouldn’t be that surprising: Stripped of Kareem, the Comedy Central crew, and the totaly random appearance of the guys from Mythbusters, the whole rally in San Francisco felt like a bizarro Tea Party rally—except no one tried to sell me anything.

Aside from a vocal army of Prop 19 activists, and a handful of others for Prop 23, the SF event was, like its mother ship, largely issue-free. Rob Gaddi, an engineer from the city, sported a big sign that read simply “I have a sign.” “I was looking for something that we could all agree on,” he explained. “Something that everybody could look at and say, ‘I agree.'” But even that was open to interpretation; for instance, he conceded, someone might think he was referring to an astrological sign—and that was okay, too. He’d participated in get-out-the-vote efforts in the past, but not this year. “I have too much of the ‘rest of my life’ going on,” he explained. Plus, he added, “it’s been a difficult year to get inspired.”

Of course, loving thy neighbor and listening to your opponents can only take you so far. As I left, the non-violent communication expert was addressing the rally. Only a few dozen attendees remained, but her face loomed large over the mostly empty plaza, courtesy of a 13-foot-wide jumbotron. If you see someone at a political rally with a semi-automatic rifle and an anti-government message, she suggested, “ask yourself, ‘What need are they trying to meet?'”