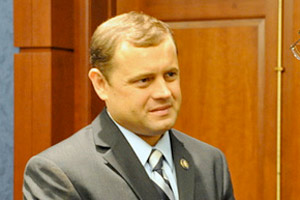 It’s never easy for Tom Perriello (whose travails were chronicled recently by David Corn). The embattled Virginia Democrat voted for President Barack Obama’s stimulus bill, cap-and-trade, and health care reform—the three-lipped kiss of death for many Dems in this year’s midterms. Strategists of all political stripes have long-since written him off, and recent polling puts Perriello down by 9 points against his Republican challenger, state Senator Robert Hurt. But despite the Battle of Bull run scenario awaiting House Democrats on Tuesday, the pugnacious and populist Perriello, who has criticized the Obama administration for being to Summersish (as in Larry Summers), refuses to go down without swinging hard. Perhaps recognizing that Perriello has gone to bat for him on key votes, Obama is heading to Charlottesville on Friday to help him close the gap with Hurt.

As reported by the AP, Democrats and Republicans alike have been keeping close tabs on the race:

To the GOP, seeking to make the election a referendum on Obama’s policies as they push to seize control of the House, Perriello is Exhibit A. They argue that Democrats like him have arrogantly ignored the will of voters and pushed a big-government agenda — earning themselves a drubbing at the polls.

But for Obama and Democrats, Perriello is the poster boy for supporting policies that have gotten a bad rap — proof that it’s possible to cast politically tricky votes, defend them unapologetically, stand next to an increasingly unpopular president, and survive.

Unpopular indeed, with an approval rating of 46%. What possible difference could Obama make for Perriello? Again, the AP:

It’s something of a gamble for the president, who could end up sharing the blame if Perriello loses. If Perriello wins, though, Obama’s help could position him to counter the finger-pointing that’s sure to follow next week’s elections. If a steadfast ally of the president’s marquee policies can survive a tough race in a conservative district, it would undercut the notion that the contests are purely a referendum on Obama.

Maybe the White House views this as a winnable race. Or maybe it sees this face-off as a chance to assure progressive Virginians that delivered the state to Obama in 2008 that they haven’t been forsaken or forgotten. Either way, it’s a dramatic move at the end of a rather difficult campaign—for Obama and Perriello.