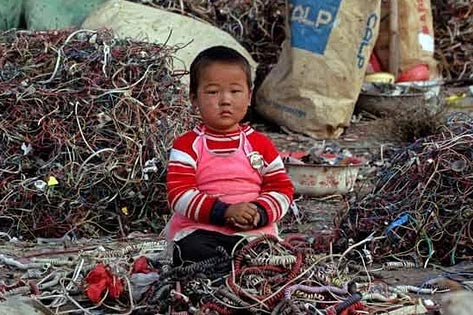 My last laptop lived till the ripe old age of six, but toward the end of its life, it went downhill fast. It took its sweet time to complete even the simplest of tasks. I developed a nervous tic of saving my blog posts every two or three minutes, since I never knew when my browser would freeze or suddenly quit. And since its battery was only good for about five minutes, my laptop was basically a desktop with a tiny screen. I considered replacing it with a refurbished model, but in the end I was seduced by a brand new laptop that I figured could probably do more tricks than a used one. Besides, I had heard that newer models were actually better for the environment, since they used energy more efficiently than older models.

I’m not the only one who prefers shinily new over gently used. According to a survey by Resource Recycling, a company that publishes industry news for recycling businesses, consumer sales of refurbished electronics have dropped in recent years, since retailers are “flooding the consumer electronics market with new devices that are comparable in price to used goods, but are packed with more features.” So are newer computers really a better deal than refurbished models in the long run? And which kind is better for the planet?

Environmentally speaking, refurbished computers are the clear winners. “An astonishing amount of resources go into making these products,” says Barbara Kyle, the national coordinator of the Electronics TakeBack Coalition. According to a 2003 UN study (pdf), the manufacture of one desktop computer requires 48 pounds of chemicals, 1.7 tons of water, and 529 pounds of fossil fuels—about 10 times the weight of the computer itself. (By comparison, new refrigerators and cars require roughly their own weight in fossil fuels.) “The more we can reuse old products, the fewer new resources need to be extracted,” says Kyle. And the less we add to the world’s pile of e-waste, which is giant and growing bigger every day.

What’s more, even though newer computers use energy more efficiently than older models, it’s not the energy use by the consumer that’s the main problem. A 2004 UN study (pdf) found that about four-fifths of the total energy consumed over a desktop computer’s lifetime is used during production of the computer—and only one-fifth was consumed during its use.

Buying a refurbished computer also makes financial sense. Though prices of professionally refurbished computers vary widely depending on hardware age, software packages, and warranties, you can often find deals for as little as half the price of a brand new machine, and in many cases refurbished models will last just as long as new ones, says Willie Cade, the CEO of PC Rebuilders and Recyclers, a computer refurbishing company. (For specifics on various brands and price comparisons, check out this excellent Gizmodo post on the topic.) Cade and his team recently outfitted desktop PCs from 2001 with the latest software, then had college students use both the refurbished computers and brand new ones in a blind test (the monitors were identical). Thirty-six percent of the students couldn’t tell the difference between the old computers and the new.

If you do choose a new computer, you can extend its life by cleaning up its software when it starts to get slow. People keep their new computers for an average of 2.5 years, but the majority of them can last a whole lot longer if you upgrade the software. “People often think computers slow down after a year or two,” says Cade. “But that’s usually a problem with the software—either there’s too much of it or it’s not working efficiently. If you refresh or clean up the software, it will usually get quicker.” According to Cade, as a general rule of thumb, if you refresh your computer’s software after its second birthday (which will usually run you a few hundred bucks), you can extend its life for three years if it’s a laptop, and five or six if it’s a desktop.

What you should look for if you’re buying a refurbished computer: Make sure the software is legally licensed and genuine—that way you’ll be able to get the necessary updates. Ideally, your refurbished laptop should come with a three-year warranty and a tech help phone number. “Someone that says 30 days—run away,” says Cade. Make sure your refurbisher is registered and/or authorized: In the Microsoft world, that means being a member of the Microsoft Refurbisher Program.

If you’re getting rid of your old computer, make sure you do it responsibly. Chances are it can be fixed and sold or donated to someone else: The refurbishing company Gazelle.com pays cash for used computers and gadgets. PC Rebuilders and Recyclers will sell your spiffed-up computer to a needy school or organization for about a third of the cost of new. Most manufacturers will take back your used electronics; the recycling information group Earth911 has a good guide to those programs, plus a list of organizations that accept donations of old computers, here. The EPA has more resources here.

Special thanks to the folks at the Story of Stuff Project, who helped me research this post. Can’t wait for the new Story of Electronics, out November 9!