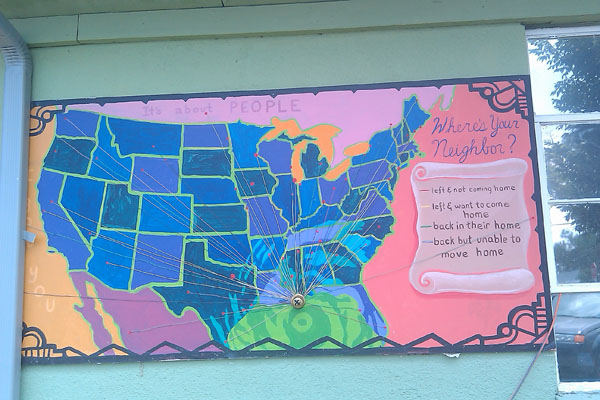 Lower Ninth Ward Village Community Center, New Orleans (Photo: Tim Murphy).San Francisco, California—Now that I’m back in the Bay Area and somewhat settled, I’ve started to get The Question. Usually there’s some sort of buildup, maybe a few softballs to butter me up—”what’s the weirdest place you went?” (without hesitation: far west Texas); “Do you like being back?” (occasionally); “Are you broke?” (yes, buy my car). And then it comes, politely, maybe a little earnestly: “What did you learn?”

Whitman’s Beard! There are all manner of short answers to that, such as:

And so on. But those are micro-answers. My best response, after 43 states, 22,000 miles, and approximately 1,115 hogsheads of trail mix, is this: It’s a big country, and you have no idea how much is going on out there until you get lost in the uncharted lands beyond the national news cycle.

There is, it won’t surprise you to hear, a lot wrong with the United States: Our senate is in a million little pieces; the state divisions make no sense; our broadband system is substandard; way too many people eat at least one meal a day at a gas station; some of our gas stations sell something called “cheddarwurst”; we’re hooked on fossil fuels even as it turns mining towns like Centralia, PA into a foretaste of hell; one of the two major political parties has gone around the bend; whole communities that once kept the pulse of the nation have been left behind and forgotten, like vestigal organs on the Rand McNally Atlas.

We’re in a tight spot. And yet, despite all of the above and the fact that—as Juan in Wyoming articulated to me so eloquently—”this country’s going to the shitter,” a day never passed that I wasn’t moved by the humor, creativity, generosity, resilience, and undiminished dreams of the people I spoke with. Or, for that matter, by their paranoia, fears, lingering prejudices, and frustrations.

There’s so much going on under the radar. A lot of it’s beautiful and some of it’s horrifying, and if the only blog posts you ever read about the rest of the country involve tea party protests, we’re all in trouble. So see the whole country for yourself—and if you can’t see it all in person (I could travel until I’m 123 and never see a quarter of it), then at least keep it in mind. Especially around election time.