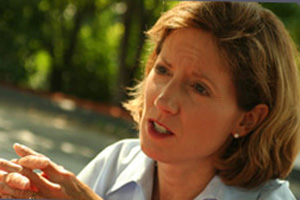 Vicky Hartzler, a Republican running for Congress in Missouri, could be the most anti-gay House candidate in America. | <a href="http://vickyhartzler.com/about-vicky/3/">VickyHartzler.com</a>.

Is Vicky Hartzler the most anti-gay House Republican candidate in America?

Hartzler, who’s running in Missouri’s 4th Congressional District, opposes gay marriage, hate-crimes laws, and the repeal of “Don’t Ask, Don’t Tell.” Those positions are common among congressional Republicans. But Hartzler has done more than merely take the standard GOP positions opposing gay rights—she has made a name for herself as an anti-gay crusader. Now she’s locked in a surprisingly close campaign with longtime Dem Rep. Ike Skelton, who was an architect of DADT. That’s right: Even in the district with perhaps the most anti-gay Democrat in the House, the Republicans still managed to nominate a candidate with a more anti-gay record.

In 2004, Hartzler drew national and international attention for her work in the campaign for a constitutional amendment in Missouri to ban gay marriage. The amendment was the first of its kind and passed—by a huge margin—in August of that year. The Human Rights Campaign and other national gay rights groups had poured hundreds of thousands of dollars into the state to campaign against the amendment. Hartzler was quoted in national and international media celebrating her victory for “traditional marriage.” That November, 11 other states followed Missouri’s lead.

Doug Gray, a political consultant who was on the other side of the Missouri amendment fight, says anti-gay bias is central to Hartzler’s identity. “It’s a core issue for her,” he says. “Vicky is biased. She has always been very motivated by this issue.” A spokesman for Hartzler’s campaign says she’s “not prejudiced against anyone”: “She just thinks certain things are a traditional part of society—marriage being one of them.”

Hartzler’s amendment was a bit of a red herring: Gays would not have been able to marry in the state, regardless. After all, Missouri is one of many states where you could still be fired for being gay, and the state has no law granting hospital-visitation rights for gay couples. Gay rights supporters had a hard time getting across the point that, since Missouri has a state law banning gay marriage, gays and lesbians wouldn’t be able to get married even if the amendment failed. Hartzler was deliberately confusing the issue, Gray says. But more importantly, the gay marriage battle distracted local advocates from more immediate fights—such as seeking employment non-discrimination rules and hospital visitation rights. “Vicky was at the forefront of this manipulation,” Gray says.

Since the Missouri amendment’s passage, Hartzler’s been a go-to quote machine whenever there is national news about gay marriage rights. When voters in California passed Proposition 8 in 2008, a “glad” Hartzler told the St. Louis Post-Dispatch that she doesn’t believe gay rights issues are civil rights issues. The “color of someone’s skin doesn’t change,” she said. But, she added, there is debate about whether homosexuality is a “lifestyle or they were born that way.”

In the primary, Hartzler and her opponent were “constantly in a battle over who was more anti-gay,” Gray says. Now Hartzler’s trying to show she’s more anti-gay than Skelton. She acknowledges that they’re on the same page regarding DADT (she says repealing it “puts us at risk“), but Hartzler’s been trying to push another charge. She argues that Skelton “allowed” hate crimes legislation to be attached to a defense authorization bill in 2009 in order to advance “the extreme agenda items of the gay movement.” Skelton was “catering to the desires of gay rights groups,” says Steve Walsh, a spokesman for Hartzler’s campaign. (At the time, Hartzler called the decision a “terrible example of liberals using the good will of our men and women in uniform to advance their radical agenda.”)

Despite Skelton’s DADT record, some activists prefer him to Hartzler. “Ike Skelton has not been a friend of the LGBT community, but he does not wake up in the morning thinking about what he can do to harm the LGBT community,” says Paul Guequierre, a spokesman for Human Rights Campaign. “He hasn’t been with us most of the time. But [Hartzler] is vehemently anti-gay.” She also has a fair chance of winning. Nate Silver, the New York Times‘ polling guru, gives Hartzler around a 1-in-3 shot. Media reports suggest that Skelton’s own internal polls only show him with a single-digit lead, while Republican internal polling reportedly shows the race tied.

In addition to her work opposing gay rights, Hartzler has pushed for other Christian right causes. In 1999, as a state representative, she backed a bill that would have allowed for prosecutors to charge women who obtained late-term abortions with murder. The law, which was vetoed by a Democratic governor, would also have permitted second-degree murder charges to be filed against doctors who performed such procedures. In 2000, Hartzler was also a leader in the fight against Missouri ratifying the Equal Rights Amendment, a federal constitutional amendment that would have formally provided for equal rights for women. In 2008, she wrote a book, Running God’s Way, outlining the “Christian” way to campaign for office.