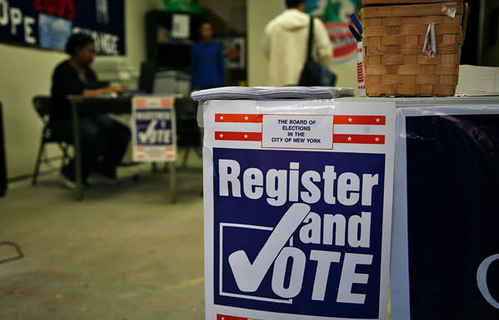 Another bummer for Democrats this election cycle: new voter registration has been plummeting this year—down 43 percent in Wisconsin as compared to 2006 and 35 percent in Indiana, with similar drops in other states, according to the Brennan Center for Justice. As I noted earlier, this is partly due to the demise of ACORN, which dissolved after a barrage of conservative-led attacks on the organization. But there are other ways the GOP has helped tamp down the number of new registrations.

As the New York Times points out, the housing crisis has foreclosed three million this year, forcing people out of their homes and making it harder for them to establish residency to vote. There are signs that Republicans have tried to seize upon this as a political opportunity: back in 2008, a local Republican group was accused of using foreclosure lists to challenge people’s eligibility to vote. The Obama campaign filed suit against the tactic, ultimately leading both the Democratic and Republican national committees to agree not to use lists of foreclosed homes to challenge voter eligibility. But given the massive uptick in foreclosures—which have increased 30 percent since 2008—Americans who’ve recently been foreclosed upon may still be confused about their voting rights, particularly given the increased suspicion and scrutiny surrounding the voter registration process as part of the Republican-led anti-fraud campaign.

Moreover—partly in response to the conservative panic about fraudulent registrations—”many states have also enacted laws in recent years that make registration drives more difficult, with stricter reporting and filing deadlines for voter registration groups,” the Times adds. In Georgia, for example, a new state law requires voters to prove citizenship, which has made the registration process more onerous.

But not everyone agrees that such laws are necessary: A similar law in Arizona was struck down just yesterday by a federal appeals court, which ruled that requiring proof of citizenship for voter registration ran afoul of the National Voter Registration Act. Voting rights advocates cheered the ruling: “This will enable the many poor people in Arizona who lack driver’s licenses and birth certificates to register to vote,” Jon Greenbaum, legal director for the Lawyers’ Committee for Civil Rights Under Law, told the AP. But it’s unlikely to do much to stop the bleeding in voter registrations this year, at least.