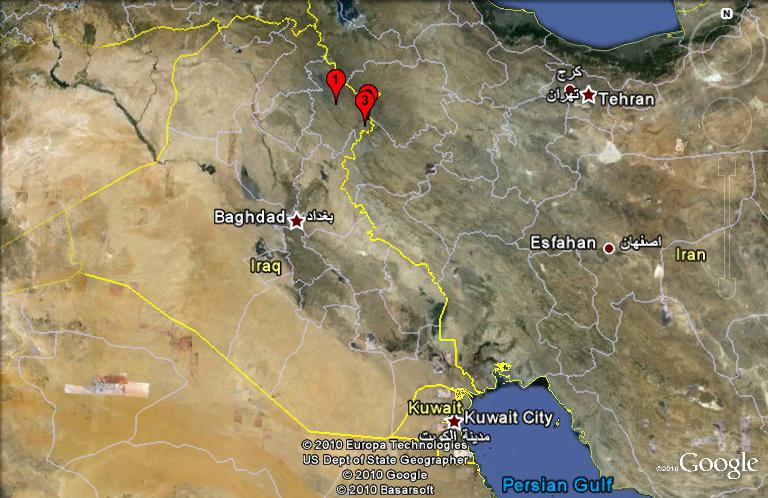 A military “significant activities” report released in the WikiLeaks Iraq War Diary says three American “tourists/reporters” arrested by Iranian authorities were actually taken while hiking in Iraq. But inconsistencies in the report demonstrate the US military’s difficulties in obtaining basic information, illustrating the challenges in assessing the reliability of the documents released last week.

Josh Fattal, Sarah Shourd, and Shane Bauer (a Mother Jones contributor) have been in Iranian custody since July 31, 2009, when they were arrested as spies for allegedly crossing the border from Kurdish Iraq into Iran. (Shourd was released last month on “compassionate grounds.”) But reports from human sources and details on the location of the hikers in the leaked military assessment support the claim (previously reported by the Investigative Fund and The Nation) that they were hiking on a Iraqi side of the rugged mountain border when Iranian forces arrested them.

The military was initially alerted to the arrests when Shourd called a friend of the threesome, Shon Meckfessel, who’d stayed back in the nearby Iraqi city of Sulaymaniyah. “A fourth tourist did not go hiking with them and reported that a kidnapped female called him saying that they were being surrounded by armed men,” the WikiLeaks report states. That was entirely consistent with what Meckfessel told us shortly after the arrests, and also with what Shourd told Democracy Now! last week, after she was released by the Iranians. “Thank God they allowed us to make a phone call,” she said. “And we called Shon, and he actually hadn’t left Sulaymaniyah yet, so he alerted the authorities in Baghdad.”

At 4:30 that afternoon, the military entered a set of grid coordinates for “where the kidnapping incident occurred.” But those coordinates, marked as point No. 1 on the map below, actually correspond not to where the hikers were actually taken, but to the spot from which Meckfessel first called military authorities. Immediately after, at 4:31, an updated military report pinpointed the location of the arrests near the Ahmad Awa mountain range, a tourist area famed for its lush vegetation and waterfalls (marked No. 2 on the map). This was consistent both with the story later told by Meckfessel and the investigation by The Nation, which found two eyewitnesses in the nearby Iraqi village of Zalim who claimed to have seen the hikers being detained. 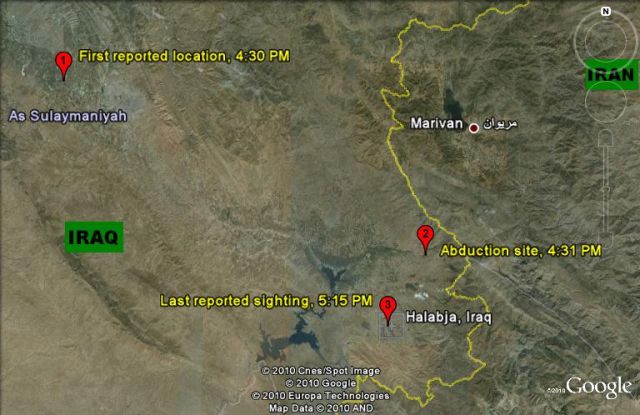 From there, the details get sketchy. Apparently having relied on Meckfessel’s testimony so far, military recovery efforts now focused on the eyes and ears of local allies, including the autonomous Kurdish government and its US-trained soldiers, the Peshmerga. At 5:15, the military recorded the “last known location of” a vehicle whose identity isn’t made clear in the report; since the hikers say they were dropped off at the hiking site a day earlier, the vehicle presumably belonged to their abductors. But the grid coordinate given by the military, marked as No. 3 on the map above, was in the nearby town of Halabjah. That would have put the hikers and their captors deeper into Iraq and farther from the Iranian border; by contrast, The Nation found that the three Americans had been spirited away across the border to Marivan, Iran, where they were taken into custody.

By 5:33, US Air Force fighter jets were searching the area, but to no avail. Kurdish forces reported that the Iranians had captured Bauer, Shourd, and Fattal, and 11 minutes later, the military received a similar report from “OSINT”: “open-source intelligence,” a public announcement by the Iranians bragging about their quarry.

For reasons unknown, intelligence officers also suggest in the WikiLeaks report that the three hikers should have known better: “The lack of coordination on the part of these hikers, particularly after being forewarned, indicates an intent to agitate and create publicity regarding international policies on Iran,” the intel assessment states. This, despite repeated claims by Meckfessel and Shourd, as well as The Nation report, that none of the hikers had any idea they were so close to the porous, unmarked border.

One thing is for sure: The State Department couldn’t get its abduction story straight to reporters. The WikiLeaks report confirms that by 11:30 the evening of the abduction, Meckfessel had been flown to Baghdad under a military escort to brief US Embassy officials on what he knew. The military public affairs office (PAO) further suggested that State Department officials were up-to-date on evidence showing the three Americans were taken inside Iraq: “All queries referred to the US embassy in Baghdad,” the PAO’s assessment reads. Yet more than a year later, in late June 2010, The Nation got a different story. “A State Department spokesman said that he had been unaware of evidence that the three were arrested in Iraqi territory but would not comment further,” Babak Sarfaraz wrote.