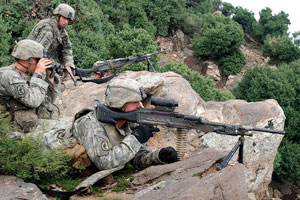 You used to be able to play as “the Taliban” in the ultra-realistic modern warfare video game Medal of Honor. As you might expect, the prospect of ten- and twelve-year-old American boys killing virtual Marines while pretending to be virtual Taliban bothered some folks. (If you’ve ever played these games online, you’d know that parents don’t adhere to the ratings system.) So now Electronic Arts, the game’s publisher, is making a change:

To be sensitive to families and friends of fallen soldiers, the game will be changed so that the “Opposing Force” or “OpFor” — not “Taliban” — will be in the multiplayer mode, says the game’s executive producer Greg Goodrich. “Medal of Honor is a big thank-you letter to the troops, and if this one word caused some troops to not be able to receive that … let’s change it and hopefully people will get that.”

As far as I can tell, this is a pretty minor change. The “OpFor” characters in the game will still presumably look like (and carry the weapons of) Taliban fighters. I have a vet friend who plays these sorts of games all the time. He certainly doesn’t seem to be bothered by the Taliban concept. But I understand how some people might be. As the New York Times‘ Seth Schiesel pointed out when this issue first arose, the Nazis have been playable characters in World War 2-era games for years. The vast majority of gamers are able to separate video games from reality. Being randomly assigned to be a “Nazi” in a multiplayer video game doesn’t make you a Hitler fan anymore than playing as an Elite in Halo makes you an alien (or a human-hater).

All this is to say that I doubt most of the people who actually play Medal of Honor will care about the Taliban issue. But video games are mass media now. Publishers, like moviemakers, have obligations to a broader group than just the folks who play their game. I think those are the folks whom this is directed at. And that’s fine. Some gamers will cry censorship, but ultimately this is a minor change. If it makes some people feel better, it’s probably for the best. Those ten- and twelve-year-olds will probably just refer to “OpFor” as the Taliban, anyway.