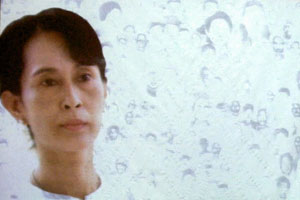 This weekend, Burmese Nobel Peace laureate Aung San Suu Kyi was released from house arrest, where she spent the better part of the last two decades. So. Now what?

(If your first question is actually Why was it again that she was imprisoned?, here’s your primer: In 1988, Burma erupted into mass protest against the dictatorship, and Aung San Suu Kyi became a symbol of a new order because her dad was Aung San, father of independence, national hero, assassinated in 1947. She started giving speeches and leading a political party, the National League for Democracy, so she was locked up by the military government. After the NLD won the 1990 elections and the dictatorship decided to just void the results, she was kept locked up, except for two brief releases. During one of which the government tried to kill her, staging an unsuccessful assassination attempt.)

Let’s start with the reasons she was let go. The military government says it’s because her sentencing time was up, but over the last 20 years, her time’s been up lots of times, and they’ve always just renewed and extended it, so no, that’s not a plausible explanation. And entertaining the possibility that the ruling generals who plunder the country and propagate ethnic cleansing campaigns had a fit of anything remotely resembling magnanimity or a change of heart is absurd. More likely, Aung San Suu Kyi’s release is a sign that they’re so secure in the status quo that they didn’t feel they needed to incarcerate her anymore. Her release also lends further credibility to the charade of democracy the regime started enacting with its rigged elections last week. And Aung San Suu Kyi’s imprisonment was one of the only lasting points of Burmese oppression anyone actually talked about. Newspapers, politicians paid some lip service to her incarceration periodically, bringing unwanted attention to the otherwise isolated regime.

The generals are right that making progress won’t be easy for Aung San Suu Kyi. Their party won the majority of legislative seats in the election. Her party was legally disbanded after it boycotted, at her advice, the polls, which caused divisions within the party as well. And while her release was score one for the generals’ honoring the most basic standards of human rights, there are still more than two thousand other, less famous, political prisoners in the country. To say nothing of that aforementioned ethnic cleansing, or the rebel militia from one of those minorities currently wreaking havoc on the eastern border.

But she’s got some momentum—and many thousands of crowding fans—behind her, too: She’s been hustling around giving interviews and speeches and calling for a chat with the generals, not that anybody (UN envoys, American presidents, whatever) ever got anything out of talking to them. She’s announced she’s going to work on a new agreement of peace and cooperation between the majority and minority groups, like the one her father made decades ago but that was never honored because of his death.

She doesn’t have any real political power to actually implement these idealistic policies. She does have one very important tool, though: the fans. “I’m glad that you are welcoming me and supporting me,” she told a crowd this weekend. “I want to say that there will be a time to come out. Do not stay quiet when that time comes.” If anybody could mobilize the much-needed revolution in Burma, it’d be her. Whether or not she’ll do it, and whether the military will fracture and fall to an uprising or just violently squash it like it usually does, remains to be seen. Like one old lady outside Aung San Suu Kyi’s house said on Saturday, “I’m happier than if I won the lottery. But this is just the beginning, not the end.”