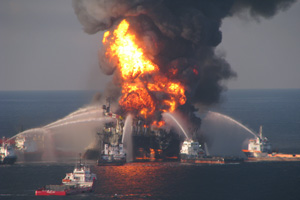 There were plenty of signs that all was not right with the Macondo well before it exploded on April 20: The cement mixture that Halliburton had provided to seal it flunked every laboratory test the company had conducted. A pressure test on the well failed multiple times as well. There were indications that oil and gas had made their way into the well, which should have been sealed. But all of these warnings went unheeded—a tragedy, since they could have helped avoid the blowout, or at least given workers some time to prevent an accident from becoming a disaster.

On Monday, the chief counsel for the National Oil Spill Commission laid out a detailed timeline of the decisions—and missteps—that likely took place on the Deepwater Horizon rig to the commission. In the first of two days of hearings in Washington, counsel Fred Bartlit and his staff outlined a number of human errors and oversights that they believe led to a disaster that took the lives of 11 men and unleashed 4.9 million barrels of oil on the Gulf of Mexico. But “don’t put too much import on any one event,” Bartlit stressed, suggesting that it was the sum of these missteps that caused the event rather than any one decision (see the full list of preliminary conclusions here).

In what was painted as among the most dramatic failures, workers misinterpreted the results of a test of pressure in the well. On April 20, several tests indicated upward pressure in the well, a sign that the cement job was not was not properly containing the oil and gas. Yet BP and Transocean workers treated the test “as a complete success,” the commission investigators concluded. “The question is why these experienced men on this rig talked themselves into thinking this was a good test result,” said Sean Grimsley, assistant lead counsel for the Oil Spill Commission. “None of these men out on the rig wanted to die.”

According to BP workers on the rig that have talked to commission investigators, Transocean staffers blamed the pressure buildup on something called the “bladder” effect—which, according to their investigation, doesn’t actually exist, said Bartlit. But figuring out why exactly this happened on that night has proven difficult, since several of the Transocean employees involved died in the blast, and two of BP’s top men on the rig have declined to testify, invoking their Fifth Amendment rights against self-incrimination.

Bartlit did note, however, that while the negative pressure test is a crucial step in establishing that the well is stable, it is not required by federal regulations or industry standards, and there are no set procedures or training requirements when it comes to this test. Thus, BP and Transocean weren’t even obligated to conduct this test in the first place.

Oil Spill Commission staff also spoke at length about indications that the cement mix from oil services giant Halliburton had failed numerous tests before it was used on this well. The commission’s investigation has found that all studies of the mix completed before the explosion found it to be unstable. At the point when workers made the final moves to close the well, only the compromised cement barrier stood between the oil and gas and the Gulf.

The panel also noted that it has not been able to conclude whether anyone on the rig or on shore saw data indicating an influx of oil and gas flowing up through the well before it was too late. The staff observing data on the well from BP’s office in Houston had already gone home for the night. But within minutes of gas surging through the pipe, the rig was in flames.

BP, the operator of the rig, and Transocean, the owner, have been accused of cutting corners in order to wrap the job up quickly. But Bartlit was clear that he didn’t believe, from the evidence that they have gathered, that there was a conscious decision on the rig to cut costs and finish the job early. “We don’t see a person or three people sitting there at a table considering safety and costs and giving up safety for cost,” said Bartlit. Rather, he said, it appeared that a number of misjudgments led up to that fateful night.

The spill commission’s co-chair, William Reilly, affirmed that finding in remarks to reporters. “We certainly found no evidence that anyone had scrimped on safety, for example, to save money,” he said. “What we have really heard today is a story of what appears to be several very human decisions made by competent professionals who missed signals.”

Bartlit stressed—repeatedly—that he believed subpoena power would be helpful in securing additional information for the investigation. The House approved a bill that would grant the commission the ability to compel witnesses to testify and turn over documents or other evidence, but Republicans blocked the measure in the Senate. Bartlit said the lack of subpoena power is a “burr under my saddle,” and has prevented investigators from obtaining information that could be valuable in their exploration of the causes of the disaster.

At one point, he asked the executives of the three companies whether they would publicly support granting the commission that power; all three declined to respond before discussing the matter with their employers. Co-chair and former Senator Bob Graham said they would renew the push to gain that power in the coming lame duck session of Congress. But Bartlit’s final report is due in five days, so that power might not be granted soon enough.

While the commission staff was hesitant to make any broad conclusions about who was responsible for the blowout, they were clear that the spill was the result of several human errors. “Nobody thought they were taking a chance,” Bartlit said.