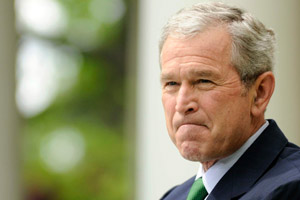 When former British Prime Minister Tony Blair released his memoirs two months ago, I noted that the long volume detailed many of the meetings he had with then-President George W. Bush during the run-up to the invasion of Iraq—but he neglected to mention a key (and controversial) January 31, 2003, talk they held in the Oval Office. According to a memo written by a Blair aide documenting the meeting, Bush and Blair in that session each said they doubted any weapons of mass destruction would soon be discovered by the UN inspectors then searching for such arms in Iraq. Without any WMDs, it could be harder to win support for the war. But Bush had an idea—or two.

The memo—portions of which were published in the New York Times and in Philippe Sands’ Lawless World —noted that Bush raised the notion of provoking a confrontation with Saddam Hussein. “The US was thinking,” the memo said, “of flying US reconnaissance aircraft with fighter cover over Iraq, painted UN colours. If Saddam fired on them, he would be in breach” of UN resolutions. A retaliatory attack would then be fully justified; the war could begin. In other words, Bush raised the prospect of staging a phony event to justify a military attack on Iraq. Bush also discussed producing some “defector who could give a public presentation about Saddam’s WMD.” The two men also agreed that it was unlikely that “internecine warfare” would break out between “different religious and ethnic groups” after an invasion of Iraq.

Now, Bush, too, is keeping the cover-up alive. In his new book, Decision Points, Bush does write about this particular meeting. He notes that he and Blair discussed squeezing another resolution out of the UN Security Council that would declare that Iraq had failed to meet its disarmament obligations under a previous resolution—in effect, handing Washington and London a go-to-war-free card. Blair felt it was politically necessary for him to obtain such a resolution in the face of the widespread British opposition to an invasion of Iraq. Bush writes, “I dreaded the thought of plunging back into the UN.” After all, both Dick Cheney and Colin Powell opposed an effort to obtain a new resolution. “But if Tony wanted a second resolution,” Bush recalls, “we would try.”

This anecdote depicts Bush as a loyal pal to Blair, no cowboy but a partner sensitive to the needs of his most important ally. But Bush says nothing about his proposal to provoke the war through fraud. (The memo, by the way, does not record Blair objecting to this potential subterfuge.)

In his book, Bush asks the reader to consider his account an honest rendering of the difficult moments and decisions he encountered as president. He makes the case repeatedly for the war in Iraq. He does so with a certain disingenuosness, saying that “America is safer without a homicidal dictator pursuing WMD.” That’s misleading spin, because the Bush administration’s own post-invasion investigation found that at the time of Bush’s assault on Iraq, there had been no active WMD programs and that Iraq had not pursued the development or production of biological, chemical, or nuclear weapons for years. Its WMD program was totally kaput. Bush, though, is still maintaining that Saddam posed a WMD threat.

It’s one thing to misinterpret facts; it’s another to pretend they don’t exist. The memo detailing Bush’s idea to con the world into war does exist. (I’ve read the entire document.) But that reality is not part of Bush’s story. This not only demonstrates that Bush’s account is neither candid nor accurate. It raises the question: what else is missing?