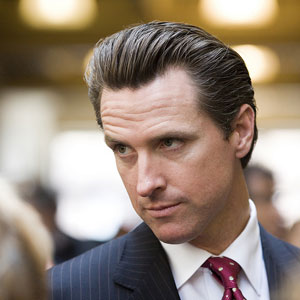 On Tuesday night, pretty much everyone who showed up at Mayor Gavin Newsom‘s campaign party in San Francisco told me how awesome he’ll be as California’s next lieutenant governor. This struck me as a funny because rather than running a major metropolitan city, the Lt. Gov. position only focuses on two main issues: the state’s struggling higher education system (the Lt. Gov. sits on the University of California’s Board of Regents and on the CSU Board of Trustees) and the environment (the Lt. Gov. is a member of several commissions that make offshore drilling-type environmental decisions).

Newsom’s campaign party headquarters was stationed in the back room of a rustic-looking brick tequila bar called Tres Agaves, where the 125 supporters crammed inside commiserated over incoming election results, cocktails, and vats of chips and salsa. Near a flat screen TV broadcasting MSNBC’s election coverage (it was changed to a local network at some point), Lowell High School teacher Ken Tray sat with three other members of the United Educators of San Francisco (UESF), a 6,000 member public school teachers union.

“San Francisco is one of the best urban school districts in California,” says Tray, who’s also UESF’s political director. “Newsom did that by creating partnerships with school unions. He’s been very good to educators in San Francisco and to us. That’s the bottom line.”

UESF president Dennis Kelly says “Newsom saved teachers from two years of layoffs,” citing 2009 when the mayor released millions from the city’s rainy day fund to save 405 teachers jobs in the wake of massive state budget cuts to education. UESF’s four-time elected vice prez Linda Festa Plack, whose son married his husband inside the mayor’s office three times during the ongoing state squabble over marriage equality, also thinks Newsom will be fantastic as an education advocate. “Newsom appointed someone to be his education liaison and he visited public schools on a regular basis. He’s initiated a program for kindergarten students where money will be set aside for their college education.” Newsom might want college funds for every kindergartener, but he will be just one of 26 members on the UC’s board: a board headed by newly elected governor Jerry Brown, whose job Newsom ran for until pulling out of the race in 2009.

At Tres Agaves, Newsom delayed his entrance until the last election numbers came in. Wearing his usual well-tailored suit and tie, he was greeted by roaring cheers from supporters. In between hordes of photo-op requests from women (and men), I asked him about his environmental policy plans hoping to catch details not included on his website. I didn’t. “San Francisco is the greenest big city in in the US and it’s because of our work,” he said. “What you do shows what you believe. I’m not an idealogue. We’re going to have to fight to implement AB32 [the Global Warming Solutions Act, which is supposed to gradually decrease greenhouse gas emissions]. ” He went on about developing green technology and changing our bad energy consumption habits, which all sound fine. But then again, he’s going to be one member in commissions with dozens of others so his influence is going to be hard to determine.

When Newsom announced his plans to run for Lt. Gov., the rumors flew that his bid was just part of his political strategy to make it to a US Senate or even governor seat, an idea his supporters alluded to at the party. So far, Newsom’s political career has been riddled with Clinton-era type bloopers. A well-publicized affair with his campaign manager’s wife, a bout with rehab, a reputation for selling the city to private businesses in an effort push out the poor, rumors that he solely rode onto his mayoral perch using his good looks and moneyed friends, and then Tuesday the passage of his draconian proposal that makes it illegal to sit on San Francisco sidewalks—but only if you’re homeless—has generated him a place on the left’s mayoral loser list. But then none of that really has anything to do with what’s required of him as lieutenant governor. And his opponent, Abel Maldonado, blew it with his ads attacking Newsom for “sanctuary city” policies for undocumented workers, his support of 2009’s state budget education cut, and his vote against the Global Warming Solutions Act.

“The state of California will never be the same with Newsom. He’s very creative,” Linda Richardson, one of the city’s Human Rights Commissioners, assured me at the party. But I really don’t know what major difference Newsom will make in the state. That said, the prospect of him adding his one vote to projects that support education and the environment is definitely why he got my vote.