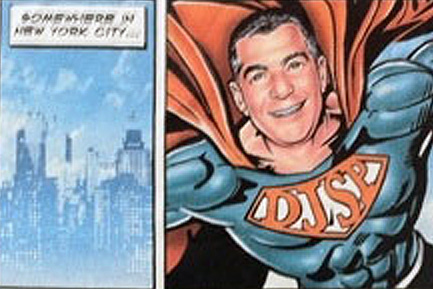 It’s all unraveling for David J. Stern, the South Florida foreclosure attorney who built a once-formidable foreclosure empire only to see it crumble in recent months. On Friday, DJSP Enterprises, Stern’s publicly traded foreclosure processing company, announced his resignation as president and CEO. Replacing him is Stephen Bernstein, a prominent real estate executive in Florida. It’s Bernstein’s job now to turn around a company that’s lost 96 percent of its initial market capitalization of $300 million in less than a year. The company has never recovered from an unexpected dip in business that caused DJSP’s stock to plummet this spring. DJSP’s stock value has hovered around $.50 a share for the past week.

The downfall of DJSP, which handles non-legal processing work for Stern’s law firm, stems largely from David Stern’s own fallout with some of his biggest clients, both in Washington and on Wall Street. After media reports, including MoJo‘s own eight-month investigation exposed the questionable, dubious practices at Stern’s firm (one former employee called it a “legal sweatshop”) and widespread evidence of rampant corner cutting and even alleged fraud, the scrutiny of Stern’s multimillion-dollar operation increased. Soon after MoJo published its story on Stern in August, the Florida attorney general announced a probe into Stern’s firm to see whether bogus paperwork had been cooked up to speed up the foreclosure proceed and churn out more profit.

Before long, facing pressure from members of Congress and the public, Fannie Mae and Freddie Mac, the taxpayer-rescued government housing corporations who’d previously counted Stern among their retained attorneys, stopped doing business with him. It was a major blow to Stern; so important (and lucrative) to him were Fannie and Freddie that he referred to them as his “babies.” Citigroup, GMAC, and Wells Fargo followed Fannie and Freddie’s lead soon after. As a result, Stern’s new business plummeted by more than 90 percent, he wrote to employees in a November letter. His operation has laid off more than 400 of its 1000-plus employees in recent weeks as a result of the slowdown in foreclosure referrals, and is expected to fire even more.

Stern began building his foreclosure empire, which today stretches from Florida to Puerto Rico to the Philippines, nearly two decades ago, in a North Miami Beach office with “ugly blue carpet and pink walls,” he once recalled. Over time, though, he built, fine-tuned, and expanded his foreclosure law firm, adding new employees and finding new ways to speed up the foreclosure process. Foreclosure mills like Stern’s get paid by the case, so the faster they plow through cases, the more money they make.

But as Stern’s firm grew and grew, it allegedly began to play fast and loose with due process and the law. As I reported,

Beyond the backdated assignments, employees told me that the firm routinely doctored legal filings. Case chronologies—the timeline of important events in a foreclosure—were changed “all day long” to create the appearance of propriety, notes a former Stern paralegal. Internal documents show that the firm attempted to push cases through the courts even when key documents like the assignment of mortgage—or the mortgage contract itself—were missing from the file. “Need to re-set. No original loan docs,” a Stern attorney wrote in a July 2008 memo after being rebuffed at a Tampa court hearing. At a Stern hearing in April, Pinellas County Judge Anthony Rondolino got so fed up with bad behavior by the mills, he declared, “I don’t have any confidence that any of the documents the court is receiving on these mass foreclosures are valid.”

That same month, a Fort Lauderdale attorney filed a class-action lawsuit against Stern and his firm, accusing them of racketeering and claiming the firm deliberately hid the true ownership on mortgages in cases involving “tens of thousands” of homeowners. A second suit, filed just days later, claimed that Stern’s firm had refused to hold up a foreclosure on a couple in Port St. Lucie, even after it was clear that they hadn’t had so much as been late with a payment.

Those practices eventually caught up with Stern. The financial health of DJSP Enterprises had gotten so bad lately that, in a financial filing, the company revealed it had defaulted on both its office rent and a $15 million line of credit with Bank of America. You couldn’t miss the irony.

While Stern still retains control of his firm, the Law Offices of David J. Stern, the future’s unclear for Stern and his publicly traded outfit.