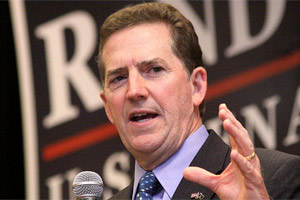 If this week’s intra-party squabbling is any indication, the ascendant Republicans could spend as much time battling each other as they do fighting to rollback the Democrats’ legislative accomplishments of the past two years.

A week after the GOP’s midterms triumph, Republican lawmakers are now at odds over earmarks—specifically, whether to ban the practice through which members lard legislation with pork barrel projects. Last Friday, Speaker of the House-in-waiting John Boehner (R-Ohio) wrote an op-ed in the Wall Street Journal listing the Republican leadership’s priorities for the 112th Congress, including continuing the House GOP’s unofficial earmark ban. Earmarks, Boehner wrote, “have become a symbol of a broken Washington.” And on Tuesday, tea party godfather Sen. Jim DeMint (R-SC) released a statement announcing his intention to seek a GOP earmarks ban in the Senate. Also signing on to DeMint’s earmark proposal were longtime earmark enemies like Tom Coburn, along with tea party-backed incoming freshmen including Marco Rubio, Mike Lee, Kelly Ayotte, Mike Lee, and Rand Paul.

Generally, an earmark is a provision inserted into a bill that directs funding to specific projects or recipients. They often get buried in huge appropriations bills. Boehner—as well other House Republican leaders, including likely Majority Leader Eric Cantor (R-Va.) and former chair of the House Republican Conference Mike Pence (R-Ind.)—have held the line on earmarks for years. DeMint boasts a similarly sterling record.

But early on Wednesday, Sen. James Inhofe (R-Okla.) pledged to fight DeMint’s moratorium, arguing that earmarks have been needlessly “demogouged” by the GOP, and that freshmen senators have been misled and misinformed about their purpose. And Politico reports that Minority Leader Mitch McConnell is mounting his own low-profile effort to defeat DeMint’s plan. Through quiet, face-to-face meetings with Republican senators new and old, McConnell hopes to dissuade them from joining up with DeMint’s gang and avoid a nasty public split within his caucus.

Odds are, Inhofe admits, that DeMint’s ban (which wouldn’t have the force of law) will pass. But he’s determined to go down swinging, and call out other Republicans for their hypocrisy. “I know politically it’s the dumbest thing for me to say I’m for earmarks,” Inhofe told The Hill.”But [the earmark moratorium] would cede authority to President Obama.” DeMint’s ban, Inhofe argues, unconstitutionally hands over congressional spending power exclusively to the executive branch.

Both parties have pledged to reform the earmarking process for years—while continuing to prodigiously earmark. DeMint sponsored a bipartisan bill pushing for a similar ban earlier this year. Its supporters included most of the Republican conference—including, strangely, Inhofe—and Democrats like Evan Bayh and Russ Feingold.

The GOP’s latest earmark crackdown seems propelled, at least in part, by the tea party, whose overarching mission is one of fiscal responsibility. In September, a number of conservative advocacy groups, including the tea party-aligned Freedom Works, launched the “Contract From America”, a response to the GOP establishment’s “Pledge to America” and spiritual heir to 1994’s “Contract With America.” The manifesto, drafted by Houston-based attorney and tea party strategist Ryan Hecker, outlines several core governing principles, including banning earmarks. “It’s ‘I’ll give you this if you vote for my bill,” says Hecker. “And there’s definitely, behind every earmark…a lobbyist.” Incoming senators Rand Paul, Marco Rubio, and Rand Paul signed onto the contract, and earmark reform, Hecker says, is an area where tea party-backed politicians can lead by example.

But if that’s the case, it’s unclear what Paul’s recent flip-flop on earmarks means for his fidelity to the movement. Despite his campaign-era vow to end earmarks, the Senator-elect now views them as only “a bad ‘symbol’ of easy spending,” and fully intends to fight for his state’s share of transparently secured earmarks. Airing his change of heart in the Wall Street Journal, Paul doesn’t seem too concerned about repudiating the movement’s faithful, not to mention the fact that he’s signed on to DeMint’s pledge.

But maybe he’s on to something. In South Carolina, DeMint’s no-earmarks stance has endangered an Army Corps of Engineers project to deepen the Port of Charleston, a crucial step towards its eventual expansion. The port plays a crucial role in South Carolina’s economy, especially for upstate companies like BMW and Michelin. Business leaders say that the $400,000 DeMint is rejecting is essential funding for a feasibility assessment of the expansion project, which, they say, will keep South Carolina’s port industry competitive. DeMint says the project will remain “up in the air” until an alternate funding solution can be found. His position, principled as it may be, could impact South Carolina’s economy.

What’s the solution? Steve Ellis, of the watchdog group Taxpayers for Common Sense, points out that over in the House of Representatives, Boehner is careful to talk about “ending earmarking as we know it”—implying that projects like the port expansion need to be better managed and less opaque, not eliminated entirely. While the Corps of Engineers falls under the executive branch, funding for individual projects must be approved by the House and Senate Appropriations committees—effectively tying the agency’s fate to earmarks. And “it’s not like you’re not going to fund the Army Corps of Engineers,” Ellis points out.

Prominent members of the Senate and House appropriations committees enjoy considerable sway over the flow of earmarks. Term limits prevent ranking member Jerry Lewis (R-Calif.) from assuming its chairmanship when the GOP takes over the House in January, which might not be such a bad thing if Boehner is trying to remake the House GOP as the party of no earmarking: Lewis raked in $325 million for his district from 2008 to 2010, and ranked 8th on the Center for Responsive Politics’ list of most egregious earmakers. (Lewis’ office isn’t commenting on earmark-related matters.) The short list also includes Kentucky’s Hal Rogers, a vocal proponent for earmarks who brought in $431 million dollars for his rural district during the past two years. He’s even taken to the crafty tactic of setting up a non-profit in his district for the express purpose of pumping it full of government money.

But candidates for the chairmanship also include earmark reformers like Arizona’s Jeff Flake (who’s not yet a member of the committee) and Georgia’s Jack Kingston. In Kingston’s view, out-of-control spending won’t be fixed by banning earmarks. Instead of invoking an outright, indefinite ban, he would convene a bipartisan committee to review the entire earmarks process. One practice that could be ripe for review under the Kingston regime: phone-marking, where lawmakers lobby government agencies to give money to specific organizations. And if Kingston’s feeling ambitious when the 112th congress meets in January, he can tackle lawmakers’ knack for circumventing the appropriations process altogether through the House Transportation and Infrastructure Committee. According to the Sunlight Foundation, the committee doesn’t require its members to disclose their earmarks online, allowing lawmakers to sneak their pet projects through the transportation reauthorization bill.

Real reformers, Kingston tells Mother Jones, should take a close look at federal grants handed out as political favors. Earmarks make easy targets for fiscal conservatives looking to voice their populist outrage to the masses. “If you look at the constitutional right to direct spending…you want to say, ‘okay, do we ban earmarks in all forms forever’? And how do you do a transportation bill if that’s the case? For right now, we need to keep the ban in place, but down the road, there are some things that we should talk about.”

For Contract From America author Hecker, that means injecting a considerable dose of transparency into the earmark process by segregating spending provisions for pet projects from mammoth appropriations bills. He’s optimistic that the House will keep Boehner’s ban intact, and then get down to the process of reform.

“On a lot of issues they’re going to be united,” Hecker says of congressional Republicans. “On earmarks, they’re not.” Senators DeMint and Coburn, he points out, have been longtime crusaders for earmark reform despite the opposition of some of their colleagues. The difference now, he says, is that they “now have a little army of newly elected Republicans behind them with a mandate.”