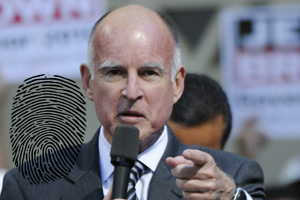 The day before Jerry Brown clinched the governor’s seat in California, a group of San Franciscans paraded down Market Street in honor of immigrant families. Decked out in skeleton facepaint and holding orange flowers—imagery taken from the Day of the Dead celebration, worn during the march to symbolize the death of migrants on the border—the activists aimed to draw attention to a bevy recent measures they see as threatening to their communities. One, Arizona’s SB 1070, you’ve definitely heard of. The other, the Secure Communities program (S-Comm), holds striking parallels to SB 1070, and has already been imposed in hundreds of places all over the country, including San Francisco. As California’s attorney general, Brown refused to help counties opt out of S-Comm. That has angered both immigrants and Latinos, some of whom threatened to withdraw their support of him over the issue.

But despite his stance on S-Comm, 86 percent of Latinos still voted for Brown on November 2, probably because Meg Whitman’s views on immigration issues looked far worse (she is against any pathway to citizenship for undocumented families, against the DREAM Act, and for banning undocumented students from universities). “I don’t think people are that inspired by his win,” says Renee Saucedo, a lawyer at La Raza Legal Center in San Francisco. “In the era of politics we are in right now, you don’t vote for people who represent your values, but you vote for the lesser of two evils.” Another reason Latino voters may have turned a blind eye to Brown’s refusal to opt out of S-Comm is that not everyone knows about the program or Brown’s role in it. And among those who do, no one can seem to figure out if opting out is even possible—including S-Comm.

US Immigration and Customs Enforcement (ICE) launched S-Comm in 2008, and by now, the program is active in 658 jurisdictions in 32 states—on its way to ICE’s goal of implementation in every jurisdiction in the country by 2013. S-Comm functions as a partnership between different law enforcement departments, allowing any fingerprints scanned during arrests to be checked against DHS immigration databases on top of the normal FBI criminal records check. But critics say that while S-Comm claims to prioritize dangerous criminal offenders, the program has led to the deportation of non-violent offenders, and many of those deported are not even criminals. In Maricopa County, Arizona, for instance, 54 percent of those deported through S-Comm are categorized as noncriminals.

In May, the Washington DC council introduced legislation allowing the city to opt-out of the program, and San Francisco looked like it was going to follow suit.* SF Sheriff Michael Hennessey sent a letter to then-attorney general Brown requesting his help to opt out of the program. “I am concerned about the unintended consequences of ICE technology interfacing with that of the Department of Justice’s fingerprint database, which also holds fingerprints collected for non-criminal justice purposes such as employment applications,” Hennessey wrote. He added that his department already reported felons to ICE and would continue to do so.

Even though Brown faced a heated gubernatorial race with Republican Meg Whitman, and might have needed to shore up the Latino vote for victory, he declined to help San Francisco opt out of S-Comm. The program took effect on June 8, and it remained murky through the summer whether opting out was even an option. The lack of transparency spurred a couple of organizations to file a Freedom of Information Act request on Secure Communities, stating that the “limited information that has been released is vague and seems to indicate that ICE is not executing its stated enforcement priorities.” ICE shot back in September with a memo called “Setting the Record Straight,” which attempted to debunk negative suspicions about S-Comm. But to make matters more confusing, in its answer to whether or not a county could opt out, the document stated:

Without clarifying whether or not participation was voluntary, ICE basically said that if country officials had a problem with it, they could write a letter. The response made it look as if even ICE didn’t know how to handle dissenters yet.

Then, an October 1 Washington Post article stunned activists and officials alike by stating “opting out of the program is not a realistic possibility—and never was.” The Post had talked to an anonymous senior ICE official, who claimed: “Secure Communities is not based on state or local cooperation in federal law enforcement.” The only way out of S-Comm would be for local officials to refuse to send fingerprints to another federal agency: “State and local law enforcement agencies are going to continue to fingerprint people and those fingerprints are forwarded to FBI for criminal checks. ICE will take immigration action appropriately.”

But despite the article, confusion remains as to whether a community might decline to take part. “We’ve receive copies of letters from the head of Homeland Security and the head of the Department of Justice saying that communities can opt out,” says Saucedo. “As far as we know, there’s still a way to do it.” She says SF Sheriff Hennessey will attend a meeting with ICE officials on November 8 to talk about the possibility of withdrawing from S-Comm. And Saucedo claims that there’s a group working with Assemblyman Tom Ammiano on statewide legislation that would clarify how counties could opt out.

In the meantime, Saucedo says activist organizations will redirect their attention away from Jerry Brown and to the new attorney general. “Up until now, the governor has not been a target; we know his stance, and it would be a waste of time.”

At the Day of the Dead celebration in San Francisco’s Mission District on election night, Latino families lingered in Garfield Park, enjoying a warm evening glowing with candlelit altars scattered in between the playground and the soccer field. Many people I approached didn’t want to talk to me about the election; they had come to lay marigolds down as homages to relatives, weaving their way between the eerie skeleton faces and the occasional drumming circle. Among the few people I talked to, everyone had voted for Brown, but their reactions to him were not overly enthusiastic.”Whoever’s in charge is going to do what they’re going to do,” Carolina Padrón told me. She seemed unconvinced that electing the right leaders would have much impact. A 27-year-old med-school student, Padrón is the daughter of immigrants and says she knows a lot of undocumented workers who won’t protest programs like S-Comm out of fear. “Many people won’t speak out about a lot of things because they are just afraid of getting deported.”

Claudia Reyes, a community organizer for Mujeres Unidas y Activas, echoed Padrón’s tepid response to the election. “Neither candidate was supporting immigrant communities,” she argued. And what to do about S-Comm? “We need to pressure the federal government on this issue,” she urged. “They haven’t told us how to opt out of this program, so we need to clear that up first.”

*Correction: We originally reported that Washington DC formally withdrew from the Secure Communities Program in July. While such a proposal was introduced, it has not yet been voted on by the full council.